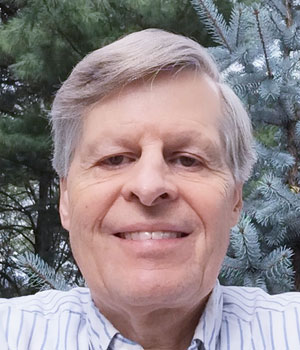 
"For the development of sophisticated trigger systems for particle physics experiments, which enabled measuring the detailed partonic structure of the proton using the ZEUS experiment at the Hadron-Electron Ring Accelerator and lead to the discovery of the Higgs Boson and the completion of the Standard Model with the Compact Muon Solenoid experiment at the Large Hadron Collider."

Wesley Smith is Professor of Physics Emeritus at the University of Wisconsin – Madison, where he was the Bjorn Wiik Professor of Physics until 2018, serving as PI of the HEP group since 2005. As Trigger Coordinator of the CMS experiment at the CERN LHC, Prof Smith led an international team of more than 100 physicists responsible for reducing the 1 GHz input rate of proton interactions to 1 kHz, by processing data from all over the CMS detector in scores of racks of high speed electronics (the design and construction of which was also led by Prof. Smith as Trigger Project Manager) and further analyzing with software algorithms on a computer farm. He had responsibility for the selection of the data producing the discovery of the Higgs by CMS and also used for hundreds of publications. Among many results, the UW group on CMS was responsible for studies of the Higgs boson decay to taus, electrons and muons and measurements of W and Z boson production accompanied by hadron jets. The group built and operated the CMS Regional Calorimeter Trigger and its upgrade as well as the Calorimeter Trigger for the ZEUS experiment at the HERA ep collider at DESY. Prof. Smith served as the Trigger Technical Coordinator and Convener for the ZEUS Experiment, as well as serving two terms as leader of the US group on ZEUS. Prof. Smith also served as spokesperson of Fermilab E-770: the CCFR neutrino-nucleon deep-inelastic scattering experiment. Prof. Smith graduated with an A.B./A.M. from Harvard in 1976 and received his Ph.D. in Physics from U.C. Berkeley in 1981. He was an Assistant and Associate Professor at Columbia University from 1982 until 1988, when he moved to Wisconsin. He received the NSF Presidential Young Investigator and DOE Outstanding Junior Investigator Awards. He is a Fellow of the APS.