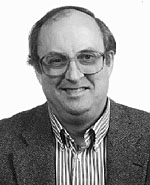 
"For fundamental insights into the structure and meaning of the axial anomaly and for contributions to the understanding of perturbative quantum chromodynamics."


William Allan Bardeen was born in 1941 in Washington, Pennsylvania. After graduating from Cornell University in 1962, He earned his Ph. D in Physics from the University of Minnesota in 1968. Following research appointments at S.U.N.Y. at Stony Brook and the Institute for Advanced Study at Princeton, he was an Assistant and Associate Professor in the Physics Department at Stanford University. In 1975, Bardeen joined the staff of the Fermi National Accelerator Laboratory where he has served as Head of the Theoretical Physics Department. During 1993-1994, he was Head of Theoretical Physics at the SSC Laboratory before its termination.

In 1985, Bardeen was awarded a John S. Guggenheim Memorial Foundation fellowship for research on the application of quantum field theory to elementary particle physics. Previously, he had received the Senior Scientist Award of the Alexander von Humboldt Foundation and an Alfred P. Sloan Foundation Fellowship for research in theoretical physics. His graduate studies at the University of Minnesota were supported by the award of a NASA Traineeship.

He has served on the Executive Committee of the Division of Particles and Fields of The American Physical Society and has been a member of the Editorial Boards of The Physical Review and the Journal of Mathematical Physics. Bardeen was elected a fellow of The American Physical Society in 1984. He has also served as a Member and Trustee of the Aspen Center for Physics in Aspen, Colorado.