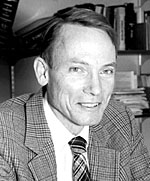 
"For his research leading to fundamental understanding and applications of atomic processes on spin or excitation transfer through atomic collisions."

His current research interests are focused on how on various gas-phase collisional interactions and wall interactions limit the large spin polarization produced by optical pumping of the magnetic resonance imaging isotopes, 3He and 129Xe. Dr. Happer's group at Princeton has designed and built MRI equipment using hyperpolarized gases which provide enhanced photos and images without the risks of radiation exposure associated with other imaging techniques. This equipment is in use at the University of Virginia and can be seen in action at the Hyperpolarized Noble Gas Magnetic Resonance Website.