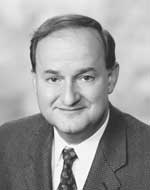 
"For the development of slow cooling methods for the fabrication of bulk metallic glasses with remarkable mechanical properties and the characterization and application of these materials."


William L. Johnson received his Ph.D. in Applied Physics from Caltech in 1974. After working at IBMs Watson Research Center from 1975-77, he returned to Caltech as a faculty member in 1977. He has held the Ruben Mettler Professiorship in Engineering and Applied Science at Caltech since 1988. Johnson was a Visiting Professor and Alexander von Humboldt Distinguished Fellow at the Univ. of Gottingen, Germany, in 1988. Johnson was named as the recipient of the TMS Hume-Rothery Award in 1996, the MRS Gold Medal Award in 1998, and the Franklin Mehl Award of TMS in 2004. He is s member of the National Academy of Engineering (class of 2000) and the National Academy of Sciences (class of 2007) and is a Fellow of both ASM and The Metals Society. A inventor on over 20 U.S. Patents, he co-founded a company, Liquidmetal Technologies Inc., which has pioneered the commercialization of bulk amorphous metals in engineering applications.