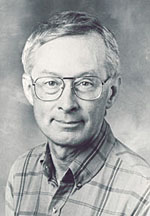 
"For his leading role in the development and exploitation of innovative techniques now widely adopted in particle physics, including liquid argon calorimetry, electron identifica-tion by detection of transition radiation, and hyperon beams."


Bill Willis was born and attended school in Arkansas. He studied physics at Yale as both undergraduate and graduate student. His thesis work, under the direction of Earle Fowler, centered on the development of hydrogen bubble chambers in the group of Ralph Shutt, leading to the Ph.D. in 1958. He then joined Brookhaven Laboratory, continuing bubble chamber studies, particularly on the weak decays of kaons and hyperons. He spent 1961-2 at CERN, participating in the measurement of the S-L parity and further measurements on leptonic decays of the hyperons, which lead to the confirmation of the predictions of the Cabibbo theory of weak interactions, based on SU3 symmetry. In 1966 he moved to Yale, where he measured the correlations of the spins of the charged hyperons and the neutrons from their decay by scattering of the neutron in a hydrogen bubble chamber. Switching to electronic techniques, he studied possible T-violating decay in muons from neutral kaon decay, followed by experiments based on the construction of a beam of high-energy S and X hyperons. The primary goal was to measure the ratio of vector and axial vector decay amplitudes in S- leptonic decay, predicted by the Cabibbo model. He then started a program to develop an experiment that could measure direct production of charged current lepton pairs in high luminosity colliders, based on measurement of the energy flow over all angles, and inference of energetic neutrinos by momentum balance. This led to the development of segmented calorimeters with electron identification by transition radiation detectors. He joined CERN in 1973 to try out these ideas in a sequence of experiments at the CERN ISR. One result of this program was the discovery of direct production of single photons in 1979. He studied collisions of nuclei at the ISR and SPS over the next ten years, at the beginning of the search for the quark-gluon plasma. In 1990 he moved to Columbia University, where he continued to work on heavy ion collisions. For the last ten years he has been involved once more with experiments at proton-proton colliders. He is currently Project Manager for the U. S. ATLAS Collaboration, working with the ATLAS experiment at the CERN Large Hadron Collider.