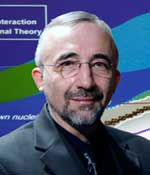 
"For his foundational work in developing and applying nuclear Density Functional Theory, motivating experiments and interpreting their results, and implementing a comprehensive theoretical framework for the physics of exotic nuclei."


Dr. Witold Nazarewicz is a professor of physics at the Department of Physics, University of Tennessee and University of Warsaw, Poland, and Distinguished R&D Staff at the Physics Division, Oak Ridge National Laboratory. He is a distinguished theorist with broad expertise in nuclear physics, interdisciplinary many-body science, and computational physics. His research has made important contributions to nuclear structure and reaction physics, especially in the areas or rare isotopes and nuclear dynamics at the extremes of isospin, mass, and angular momentum. With an h-index of 67 and over 14,000 citations, he is listed by ISI among the most highly cited in physics. He is a Fellow of AAAS, APS, and IoP. He received honorary degree of Doctor of the University of the West of Scotland. He has served on three committees of the National Research Council of the National Academies.  He serves as a Co-Director of the UNEDF SciDAC Program; Associate Editor in Nuclear Physics, Reviews of Modern Physics; Editor with Computer Physics Communications; member of FRIB Science Advisory Committee; member of the steering committees of JUSTIPEN and FUSTIPEN. He has served on numerous DOE, NSF, and APS committees, including the Nuclear Science Advisory Committee (NSAC) and the Division of Nuclear Physics of APS; he was a member of NSAC Long-Range Planning Working Groups in 1995, 2001-2002, 2005, 2007-2008; and he has served on advisory committees of NSCL/MSU, ATLAS/ANL, 88" Cyclotron/LBNL, HRIBF/ORNL; INT/Seattle; TRIUMF/Canada; Jefferson Lab. In 2000-2005 he was a C-Chair and Chair of the RIA Users Organization.