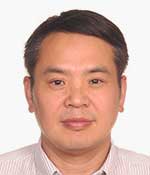 
"For pioneering work in developing tools to characterize the structure of the nucleon within QCD and for showing how its properties can be probed through experiments; this work not only illuminates the nucleon theoretically but also acts as a driver of experimental programs worldwide."


Xiangdong Ji received his B.Sc. from TongJi University in 1982, and Ph.D. from Drexel University in 1987. He was appointed as Assistant Professor in Nuclear theory at Massachusetts Institute of Technology (MIT) in 1991 and Professor at University of Maryland, College Park in 1996 and was Director, Maryland Center for Fundamental Physics 2007-09. Ji is still a professor at the University of Maryland, as well as Hong-Wen Professor of Physics and Director, Institute for Nuclear and Particle Physics at Shanghai Jiao Tong University (SJTU). He has received the Jefferson Science Associates (JAS) 2015 Outstanding Nuclear Physicist Award; Alexander von Humboldt Foundation Research Award (2014); National 1000-Talent Expert, China (2010); and the Distinguished Oversea Young Scientist Award, National Science Foundation of China (2004). He was also elected as a Fellow of the American Physical Society in 2000.