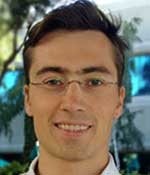 
Yaroslav Dudin was raised in Saransk, Russia. He studied Physics at the Moscow Engineering Physics Institute, graduating with honors in 2007. While there, he joined Prof. Vladimir Velichansky's group at the Lebedev Physical Institute where he investigated effects of coherent population trapping in atomic vapors and developed compact atomic clocks and magnetometers. He spent the summer of 2006 in Boulder, CO testing the local position invariance using the NIST-F1 cesium fountain under the guidance of Dr. Steven Jefferts. In 2007, Yaroslav moved to Atlanta to pursue his Ph.D. under supervision of Prof. Alex Kuzmich at Georgia Institute of Technology. There, Yaroslav developed optical-lattice-based quantum memories, employing them for demonstration of a deterministic source of single photons based on quantum measurement and feedback, entanglement of light at near-infra-red and telecom wavelength with long-lived atomic memories, and in the process extending memory lifetime up to 16 seconds. He also studied the behavior of a cold atomic gas with strong many-body interactions introduced by highly-excited Rydberg electronic states. His experimental results in this area include the first realization of a Rydberg-atom-based single photon source, initial observations of many-body Rabi oscillations in a mesoscopic atomic ensemble, and deterministic generation of entanglement between an optical atomic coherence and a light field. Yaroslav presently works on metrological instruments for KLA-Tencor.