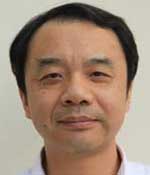 
"For their leadership of the Daya Bay experiment, which produced the first definitive measurement of the theta-13 angle of the neutrino mixing matrix."


WANG Yifang was born in Feb. 1963 in Nanjing, China. He obtained B.Sc in 1984 at Nanjing University, China, and Ph.D in 1991 at the University of Florence, Italy. He worked subsequently in MIT, Stanford University in US and joined the Institute of High Energy Physics(IHEP), China in 2001 as a researcher and became the Director in 2011.

He was a member of L3, AMS, Palo Verde and KamLAND collaborations, and at IHEP, he led the design, construction and science efforts of the BESIII experiment as the project manager and spokesperson until 2011.

He proposed the scheme of the Daya Bay experiment with a special modular arrangement and innovative detector design, to precisely measure the neutrino mixing angle 13. He negotiated with the power plant, managed the civil construction and led the experimental effort as the co-project manager and the co-spokesperson until 2012. He is now leading the JUNO experiment to measure the neutrino mass hierarchy using reactor neutrinos.

He is an author of more than 300 scientific papers, the chief editor of two books, a recipient of “ZHOU Guangzhou Basic Science award”, and “Ho Leung Ho Lee Foundation for scientific and Technological Progress Award”.