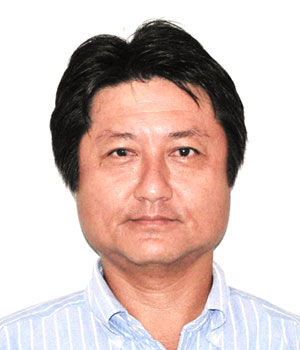 
Youichi Sakawa received B.S. in 1984 and M.S. in 1986 from Department of Electrical Engineering, Osaka University, studying laser fusion at Institute of Laser Engineering. Early in 1992 he received Ph.D. from Department of Electrical Engineering, UCLA. He joined Nagoya University as an Assistant Professor in 1992. At Nagoya he worked on basic plasma physics experiments, such as helicon wave discharge, laser cooling of Ca ions in a rf trap, strongly-coupled dusty plasma, and pulsed-laser ablation of hydrogen-implanted graphite target. In 2006 he returned to Institute of Laser Engineering, Osaka University as an Associate Professor, where he started laboratory astrophysics research using power-lasers as a leader of experimental group. He has performed several series of experiments on electrostatic collisionless shock formation in counter-streaming plasmas produced with a double-plane target using nanosecond power-lasers in the world, such as Gekkko XII (Japan), LULI2000 (France), and Shenguang II (China). In 2010 his proposal on Weibel-mediated collisionless shocks was adopted for the 1st call of the NIF facility time proposal, and the world-wide collaboration on collisionless shocks using Omega laser started. Recently he has expanded his interests in laboratory astrophysics research using high-intensity lasers and XFEL. He received the Daiwa Award from the Daiwa Anglo-Japanese Foundation in 2007, and Osaka University Prize for University Administration in 2017.