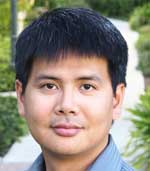 
"For measurements and theory of the ultrafast, high field, nonlinear response of gases near the ionization threshold, characterization of femtosecond plasma filaments, and demonstration that femtosecond filamentation requires plasma stabilization."


Dr. Yu-hsin Chen received the B.S. degree in electrical engineering and the M.S. in electro-optical engineering in 2000 and 2002, respectively, both from National Taiwan University. He obtained his Ph.D. degree in electrical engineering from University of Maryland, College Park in 2011. His dissertation investigated the effect of ultrafast optical nonlinearities of air molecules on laser filamentation, and demonstrated the direct, time- and space-resolved measurement of plasma density in femtosecond laser-produced filament in atmosphere for the first time. This work was conducted in Intense Laser-Matter Interactions Group advised by Prof. Howard Milchberg at University of Maryland.

Dr. Chen is currently working at Lawrence Livermore National Laboratory. He is a member of the American Physical Society.