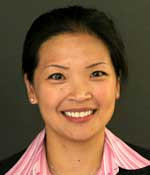 
Yueh-Lin (Lynn) Loo received BSEs in Chemical Engineering and Materials Science and Engineering from the University of Pennsylvania in 1996 and a Ph.D. in Chemical Engineering from Princeton University in 2001.  After a year at Bell Laboratories, Lynn started her independent program at the University of Texas at Austin.  In 2007, she returned to Princetons Chemical Engineering department where she is now an associate professor.  Her group is interested in understanding the structure-function relationships that govern block copolymers, organic semiconductors and polymer conductors, especially in organic solar cells and thin-film transistors.  She and her group have also been recognized for developing non-invasive printing and patterning methods for fabricating organic electronic devices.  Among the accolades include a Camille and Henry Dreyfus New Faculty Award (2002), a DuPont Young Professor Grant (2003), an NSF-CAREER Award (2004), and an Arnold and Mabel Beckman Young Investigator Award (2005).  Lynn was selected as a Top 100 Young Innovator under 35 by MITs Technology Review in 2004.  In 2006, Lynn was recognized with the inaugural Peter and Edith ODonnell Award in Engineering by the Academy of Medicine, Science, and Engineering of Texas and the Allan P. Colburn Award from the American Institute of Chemical Engineers.  She was named a Sloan Fellow in Chemistry in 2008.