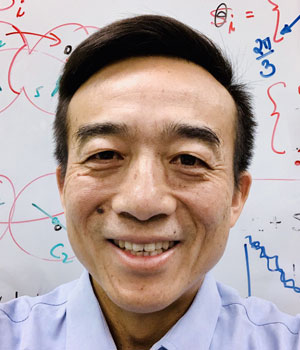 
Yuhai Tu graduated from the Special Class of the Gifted Young at University of Science and Technology of China in 1987. He came to the US under the CUSPEA program and received his PhD in physics from University of California, San Diego in 1991. He was a Division Prize Fellow at Caltech from 1991-1994. He joined IBM Watson Research Center as a Research Staff Member in 1994 and served as head of the theory group during 2003-2015. He is a member of APS and was elected APS Fellow in 2004. He served as the APS Division of Biophysics (DBIO) Chair in 2017. Yuhai Tu has broad research interests, which include nonequilibrium statistical physics, surface physics, bioinformatics, biophysics, and recently machine learning. Trained in statistical physics and nonlinear dynamics, he has applied his analytical and computational skills in a diverse set of areas and accomplished many highly original work, such as the Toner-Tu equation in flocking theory, the growth dynamics of the Si-aSiO2 interface, the Genes@Work pattern discovery algorithm for RNA microarray analysis, the standard model of bacterial chemotaxis, and the energy-speed-accuracy tradeoff in sensory adaptation, biochemical oscillation and synchronization. In many cases, his pioneering work has opened up new directions of research, e.g., collective behaviors in active matter systems, pattern discovery in large scale biological data, and nonequilibrium thermodynamics of biochemical networks.