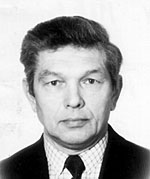 
"For their leading role in the first demonstration of mixing in the BO - B-O system. The unexpectedly large value of the mixing parameter provided indirect evidence for a large top quark mass and has greatly enhanced the possibility for studying CP violation in B meson decays. This capability has encouraged a worldwide effort to determine whether the small CP violation in K decay is a reflection of a fundamental parameter characterizing transitions of quarks among the three generations."


Dr. Zaitsev received his equivalent of an undergraduate degree from Moscow Engineering Physical Institute in physics in 1960 and his Ph.D. in 1968, He is currently lecturing as a professor of physics at the Moscow Physical Technical Institute.

In the 1960's, Dr. Zaitsev took part in several experiments on measurements of IT+IT- interactions at low transfer momenta. Later in the 1970's he took part in the experiments on investigation of high-energy particle interactions with nuclei. In 1978 he participated in an experiment at Fermilab on backward particle production in proton-nuclei interactions in collaboration withthe University of Pennsylvania. In 1979 he worked with DESY in Germany on the ARGUS detector as a group leader in design, creation and running of muon systems. He has published over 200 scientific articles, presented the ARGUS results at many international conferences on high-energy physics dudring the past decade, and is currently working with the HERA-B Collaboration as a coordinator of muon systems.