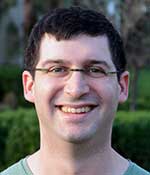 
"For his thesis entitled “Cold Chemistry with Cold Molecules,” which he wrote under the direction of Prof. Ed Narevicius at the Weizmann Institute of Science."


Yuval Shagam, Ph.D., earned his B.Sc. in physics and computer science in 2010 at the Hebrew University in Jerusalem. He subsequently moved to the Weizmann Institute of Science to earn his M.Sc. degree in physics. In 2011, Dr. Shagam joined the laboratory of Prof. Edvardas Narevicius, switching to the direct Ph.D. track in 2012. In his research Dr. Shagam focused on low temperature chemistry and physics with cold molecules. He used the merged molecular beam technique developed at Weizmann to measure quantum effects that dominate dynamics at low collision energies. Focusing on how the molecular quantum rotor affects reactions, Dr. Shagam found that the symmetries of the quantum molecular wavefunctions of different rotational states can change the nature of long-range forces as directly probed in universal Langevin reactions. Dr. Shagam also used rotational molecular state symmetry to directly quantify with near spectroscopic precision the angular dependence of atom/molecule interaction using quantum resonances, which can be turned on or off by choosing the molecule’s rotational state. Completing his Ph.D. in 2016, Dr. Shagam received the Israel Chemical Society Excellent Graduate Student Award for his work, as well as a Rothschild postdoctoral fellowship. In his next position, Dr. Shagam will join the groups of Eric Cornell, Ph.D. and Jun Ye, Ph.D. at JILA in the University of Colorado Boulder as a postdoctoral research associate, where he will measure the electron electric dipole moment using trapped molecular ions.