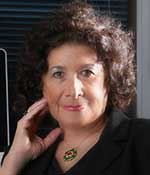 
"For life-long devotion to the scientific freedom and human rights of scientists throughout the world and for compelling leadership in using science as a bridge to peace in the Middle East."


Zafra Margolin Lerman received her B.Sc. and M.Sc. in 1964 from the Technion, Israel Institute of Technology, and her Ph.D.in 1970 from the Weizmann Institute of Science in Israel. She is the President of the Malta Conferences Foundation, which uses science for diplomacy and as a bridge to peace in the Middle East. She has received over 40 national and international awards, among them the Presidential Award from President Clinton, the ACS Parsons Award for outstanding public service to chemistry, the Pagels Human Rights Award from the New York Academy of Sciences, The International Conference on Chemistry for Mankind (India) Award for Stimulating Collaborations and Ensuring Human Rights, and the AAAS Award for Science Diplomacy. She developed an innovative approach of teaching science using art, music, dance, drama, and cultural backgrounds, which proved to be extremely successful among underprivileged students around the world. For 25 years, she had chaired the committee on Scientific Freedom and Human Rights for the ACS. She has been successful in preventing executions, releasing prisoners of conscience from jail and bringing dissidents to freedom. She is a Fellow of the American Chemical Society, the American Association for the Advancement of Science, the International Union of Pure and Applied Chemistry, and the Royal Society of Chemistry (UK).