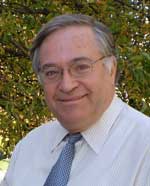 
"For pioneering contributions to the understanding of optical phenomena in complex materials including conducting polymers, semiconductors, and high temperature superconductors."


Zeev Valentine Vardeny is Distinguished Professor of Physics at the University of Utah. He received his B.S. (1969) and PhD (1979) in physics from the Technion, Haifa, Israel. He received the Alon Price in 1982; the University of Utah Research award in 1996; the Willard Award of Art and Science in 1997; the Lady Davis Professorship at the Technion in 2000 and again in 2005; the Utah Governors Medal of Science and Technology in 2005; and the 2008 Frank Isakson APS Prize for Optical Effects in Solids. He is a fellow of the American Physical Society (1996). He is Editor of the Physical Review B, and Jour. of Synth. Metals; and consultant of two major corporations: Cambridge Display Technologies, and Plextronics. Vardeny has published about 460 research articles and holds 10 patents and provisional patents. His research interest include optical, electrical and magnetic properties of organic semiconductors; fabrication of organic optoelectronic and spintronics devices; laser action and transient spectroscopy of organic semiconductors, amorphous semiconductors, nanotubes, and fullerenes; fabrication and properties of 2D and 3D dielectric, metallo-dielectric and metallic photonic crystals and plasmonic lattices.