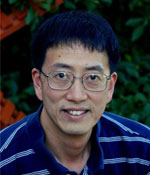 
"For development of techniques to laser cool and trap rare and radioactive atomic species; and for applications of these techniques ranging from trace isotope analysis to tests of fundamental symmetries."


Zheng-Tian Lu is a Senior Scientist in the Physics Division of Argonne National Laboratory and a Professor (part-time) in the Physics Department and Enrico Fermi Institute of The University of Chicago. He received a B.Sc. from the University of Science and Technology of China in 1987, and a Ph.D. from the University of California at Berkeley in 1994. He was a postdoc at JILA prior to joining Argonne in 1997. He has been an APS member since 1988, and was elected a Fellow in 2006. Throughout his career, Lu has been developing novel techniques of laser manipulation and laser spectroscopy of atoms, and applying these techniques to ultrasensitive trace analysis, studying nuclear structure, and testing fundamental symmetries. For the development of the Atom Trap Trace Analysis method, he received both the Presidential Early Career Award for Scientists and Engineers and the DOE Office of Science Early Career Scientist and Engineer Award in 2000.