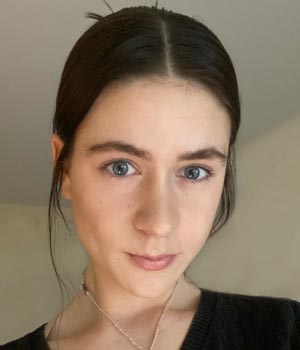 
"For the discovery of distinct dynamical regimes for coherent ultracold atoms confined in a ring-shaped lattice potential; and for developing a statistical model that depicts the formation of phenotypic patterns associated with bacterial biofilm growth."


Caelan Brooks graduated summa cum laude from Kutztown University in 2021 with a B.S. in Physics and minors in Mathematics and Spanish. She worked with Prof. Kunal K. Das on ultra-cold atoms trapped in ring-shaped lattices, demonstrating the existence of two distinct dynamical regimes with continuous transition possible via rotation. She and Prof. Das further examined the quantum states of lattices with cylindrical topology in the context of synthetic gauge fields and explained gauge-sensitive features that emerge due to the periodic boundary condition. Through an REU program at Boston University, Caelan also investigated the emergence of unique phenotypic patterns in Bacillus subtilis bacterial biofilms. With Prof. Joseph Larkin of BU and Prof. Andrew Mugler of the University of Pittsburgh, she created a model for the underlying intercellular interactions that describe the emergence of macroscopic fractal-like patterns seen in experiments. Caelan is the first author on three papers tied to her work, in journals such as Physical Review A. She is the recipient of the Chambliss Gold Medal, the KU Sesquicentennial Academic Honors Scholarship, and the Syed R. Ali-Zaidi award cited by the Pennsylvania State Congress. During her three years as an undergraduate, she maintained a perfect GPA, was a member of the nationally ranked KU women’s soccer team and served on the executive board of the local SPS chapter. Caelan is currently pursuing a doctorate in Physics at Harvard University.