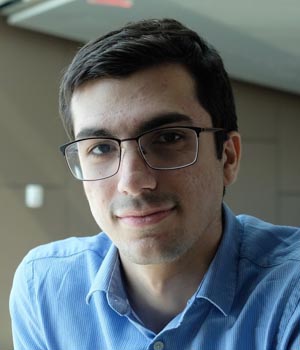 
"For the invention of the selective dynamical imaging method, with applications for studying rapidly-varying black holes."


Joseph Farah is a first-year Ph.D. student in astrophysics, studying supernova and experimental cosmology as part of the Las Cumbres Observatory (LCO) and the Global Supernova Project (GSP). His graduate research is funded by an NSF GRFP. He received his bachelor's degree in physics from the University of Massachusetts Boston in 2021. As an undergraduate, Joseph worked on the Event Horizon Telescope (EHT) project as a Smithsonian Fellow at the Harvard-Smithsonian Center for Astrophysics (CfA) under the supervision of the brilliant Michael Johnson. He helped produce the first image of M87* and led the development of novel techniques for analyzing and measuring the shadows of black holes observed with the EHT. He remains a member of the EHT Collaboration and is leading a paper describing a method for dynamically imaging sources such as the Galactic Center on short timescales as part of the effort to image Sgr A*. For his work with the Collaboration, Joseph was named a Barry M. Goldwater Scholar and a co-recipient of the Breakthrough Prize in Fundamental Physics. Outside of his research, Joseph is a digital artist and a competitive quarter-mile drag racer. He is also the CTO and co-President of Astraveo.