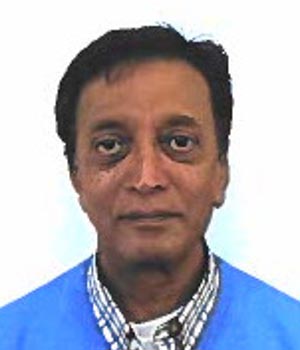 
"For fundamental contributions to the physics of hot and dense matter, and their implications for heavy ion collisions and multi-messenger observations of neutron star structure and evolution."


Madappa Prakash earned his Ph.D. degree in physics from the University of Bombay (1979), while he was employed at the Bhabha Atomic Research Center, Bombay. His post-doctoral studies were conducted at the Niels Bohr Institute, Copenhagen (1979-81) and Stony Brook University (1982-86), where he taught and engaged in research until 2005. Prakash joined Ohio University in 2005 as a full professor, in part to be the ``glue'' between Nuclear and Particle Physics and the Astrophysics research under the program ``Structure of the Universe: From Quarks to Super-Clusters''. Prakash has a broad range of interests. Beginning with the nuclear fission process in his Ph.D. thesis, his research has covered many of the myriad phenomena that occur in nuclei and in nuclear matter under extreme conditions of density, temperature, and magnetic fields. His work has illuminated the role of the equation of state of dense matter in nuclear collisions from low to very high energies and the structure of neutron stars. His work includes the evolution of neutron stars from their birth to old age, neutrino interactions and propagation in dense astrophysical systems, and the theoretical interpretations of the growing number of observations of neutron stars. He develops equations of state, neutrino opacities, and transport characteristics in dense matter for studies of supernovae and binary mergers involving neutron stars and black holes. In 2001, Prakash was elected a Fellow of the American Physical Society (Division of Nuclear Physics) `` For fundamental research into the properties of hot and dense matter, providing a basis for understanding relativistic heavy ion collisions and the structure and composition of neutron stars''.