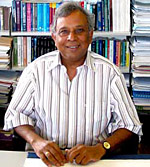 
"For his prodigious and successful efforts in encouraging young scientists from under-represented countries throughout the world, by his regular visits to their universities and by facilitating their participation in international meetings and workshops."

Positions: Permanent member of the Faculty of Physics and Astronomy at Ruhr University Bochum, Germany since 1973; Permanent Visiting Professor at the Department of Physics at Ume\aa~ University, Sweden since 1997; Associate Member of the Max-Planck Institute for Extraterrestrial Physics, Garching, Germany since 1999; Invited Full Professor at the Department of Physics of Instituto Superior Technico, University of Lisboa, Portugal since 2004; Visiting Fellow at the Centre for Fundamental Physics, Rutherford Appleton Laboratory, Chilton, UK since 2004.

Scientific endeavours: My current work is primarily in the field of theoretical plasma physics, with particular emphasis on basic plasma science, space and astrophysical plasmas, complex dusty plasmas, low-temperature and industrial plasmas, high energy density physics and inertial fusion, and magnetic fusion. I am also working in the areas of geophysical flows, nonlinear optics, Bose-Einstein condensation, nonlinear physics of metamaterials, nonlinear neutrino plasma physics, and nonlinear quantum electrodynamics. It has been a great pleasure for me to discover, nurture, and mentor scientific talents across the globe. To receive the APS 2005 Nicholson Medal for Human Outreach is both a great honor and a source of much appreciation of the work that I have been carrying out to disseminate knowledge within the physics community.

Awards and honors: Gold medal for the best B. Sc. and M. Sc. from Kashi Naresh Postgraduate College at Gyanpur, Varanasi (then affiliated with Agra University), India; Fellowship from the Council of Scientific and Industrial Research, Government of India, 1969-1970; Fellowship from the Japan Society for the Promotion of Science (JSPS) in 1995; Doctor Honoris Causa from the Russian Academy of Sciences, Moscow in 2004; Chairman of International Advisory Board of the International Conference of the Physics of Dusty Plasmas (ICPDP) since 1997; Chairman of the International Topical Conference on Plasma Physics (ITCPP) since 1995; Co-director of the Plasma Physics activity at the Abdus Salam ICTP, Trieste since 1989; Editor of J. Plasma Physics since 2005; Associate Editor: J. Plasma Physics (1992-2004); Planetary and Space Science (1993-1998); IEEE Transactions on Plasma Science (1999-present); Editorial Board Member of Plasma Physics and Controlled Fusion (since 2000) and New J. Physics (since 2004); Fellow of the American Physical Society and Fellow of the Institute of Physics (London, UK); Member of the American Physical Society, American Geophysical Union, Institute of Physics, and Plasma Science Society of India; Elected Member of Commission 16 (Plasma Physics) of IUPAP since 2002.