The aim of PhysicsQuest is to introduce students to the basic concepts of physics, through fun experiments that will sustain their interest in math and science.

PhysicsQuest experiment kits demonstrate the fun and relevance of science to middle school students as they learn more about the physical world.

Although kits for past PhysicsQuest projects are no longer available, your class can still complete the projects. You can download all of the written materials and use the provided materials list to collect everything else you need.

PhysicsQuest 2021
Discover the wonderful world of Quantum Mechanics and learn about the incredible life and work of Dr. Deborah Jin, a quantum scientist who used lasers and magnets to cool down atoms and make new states of matter.

PhysicsQuest 2020
Students will learn the physics of falling, swinging, flinging, and the basics of orbital motion that Katherine Johnson used to help put the first Americans in space.

Spectra. Lucy and her Tesla Junior High classmates take a trip to the Laser Interferometer Gravitational-Wave Observatory (LIGO) in Hanford, WA. During their visit, they learn how LIGO looks for gravitational waves to detect the signals or accelerating masses like supernovae and black holes.

In 2015, the LIGO facilities allowed scientists to observe gravitational waves produced by the merger of two black holes, which matched predictions of Einstein's theory of general relativity. This Issue Or Spectra, developed in collaboration with LIGO, will help readers understand the science behind this groundbreaking discovery that received the 2017 Nobel Prize in Physics.

Spectra's Energetic Escape (2018)
The students at Tesla Junior High are thrilled to hear that their favorite magazine, Fetch, has selected their school to be profiled in its upcoming issue. There’s just one twist—they aren’t profiling the whole school, just a select 16 students that will be competing in 24 hours of challenges to win tickets to see the latest, hottest boy band: the Free Radicals!

Spectra's Sonic Surprise (2017)
It’s bad enough that Lucy’s powers have mysteriously started to vanish—and goes from bad to worse when the school dance is cancelled because of a power outage! But something strange is happening to Kass, and it might just help the crew save the day.

Spectra's Current Crisis (2016)
Andy and Cathy Terminal, two slick hucksters, have come to Lucy's town pitching the latest and greatest in electromagnetic entertainment—the Magno-Go-Round! But at the same time, a mysterious man in a white suit is overheard talking about scamming the town for all it's worth. Something's amiss, and it's up to Lucy and her friends to find out what!

Spectra: High Intensity (2015)
Miss Alignment has broken out of jail and is on the loose hatching evil plans. Armed with a high IQ, an inferiority complex, and a secret lair, she will try yet again to control the town. Your students can help Spectra, her gang, and her new friend the Quantum Mechanic stop Miss Alignment’s focus on evil.

Spectra's Quantum Leap (2014)
Tesla Junior High is in ruins after H. Toueaux destroyed the gym during the big swim meet. The gang is scattered between 3 different middle schools as they wait for their school to be rebuilt. When Lucy’s mom takes their ancient mini-van to Black Body Repair, she gets a little more than she bargained for. Owner and chief mechanic Pauli Black gives the van more than new brakes, she gives it a quantum kick. With the gang so spread out, Spectra will have to use both her laser powers and the quantum additions to her mom’s mini-van to stop the Quantum Mechanic's super-powered machines.

Spectra: Turbulent Times (2013)
Follow Spectra in her next adventure. It’s wintertime, and the swim team of Tesla Junior high has gone to Pasadena, CA for their yearly winter training camp. The state championship meet is coming up, where they will face the unbeaten Edison Middle School Wizards of Menlo Park, IN. Coach Henri Toueaux will stop at nothing to secure a new trophy for his office and he doesn’t care who he leaves in his wake, including his team. Follow Spectra and her gang as they use her laser powers and their knowledge of fluid flow to stop H. Toueaux from crossing the line from motivating coach to evil villain.

Spectra Heats Up! (2011)
Lucinda Hene began life as the most ordinary of children. She did fairly well in school and was on the swim team but she longed to stand out. Child of brilliant laser scientists, Lucinda dreamed of being more than normal, of being extraordinary. Then one day it happened. She felt something inside her begin to change. She changed from normal Lucinda Hene to the powerful Spectra, a super hero with the powers of a laser. To unlock the mystery of her past and her powers Spectra must defeat the most evil of super villains, the beautiful yet deadly Miss Alignment.

Spectra's Force (2010)
PhysicsQuest is a middle school competition that consists of four physical science experiments centered on a mystery. The experiments are designed to be done by small groups in a classroom or after school setting. Each of the experiments gives students a clue that they need to solve the mystery. Classes can submit their answers online and be entered into a random drawing for prizes. PhysicsQuest kits are provided free to registered classrooms.

Spectra: The Original Laser Superhero & Spectra's Power (2009)
Lucinda Hene began life as the most ordinary of children. She did fairly well in school and was on the swim team but she longed to stand out. Child of brilliant laser scientists, Lucinda dreamed of being more than normal, of being extraordinary. Then one day it happened. She felt something inside her begin to change. She changed from normal Lucinda Hene to the powerful Spectra, a super hero with the powers of a laser. To unlock the mystery of her past and her powers Spectra must defeat the most evil of super villains, the beautiful yet deadly Miss Alignment.

Nikola Tesla and the Electric Fair (2008)
Born in 1856 in Smiljan Croatia, Nikola Tesla was a true genius. A close friend of Mark Twain and bitter rival of Thomas Edison, he invented such things as the remote control and the AC generator. In 1893 he was charged with lighting the Chicago Worlds Fair, the first electric fair in the world, nicknamed The White City.

Marie Curie's Floating Classes (2007)
Marie Curie was a brilliant scientist who received two Nobel Prizes. She had to fight hard to become a scientist because she was a Polish female growing up in Russian-controlled Warsaw – some of her classes had to constantly change locations to avoid being detected by the police.

Ben Franklin's Secret Message (2006)
We all know Benjamin Franklin as an accomplished inventor, scientist, and statesmen, but did you know he was one of America’s first spies? Travel back to 1778 with PhysicsQuest to decipher a secret message from Ben.

What do physicists do? Who can become a physicist? These are common student questions. Hopefully you will see the answers can be: EVERYTHING and ANYONE, including YOU. Physics is a branch of science that studies matter, its components, its motion, as well as how it interacts with energy and forces. There are many branches of physics including mechanics, electricity, astronomy, motion, waves, sound, and light. Physics studies the smallest elementary particles and atoms as well as the largest stars and the universe. Come and learn all you can do with physics by discovering the work of amazing physicists working across many disciples in science, media, technology, and beyond.

In this edition of PhysicsQuest, you will find teacher’s guides with extensive implementation notes and fillable PDFs for the student guides for two lessons: Careers in Physics and Women in Physics. Click on each lesson at the link below to see available middle school materials. Both can stand alone or be taught in tandem. 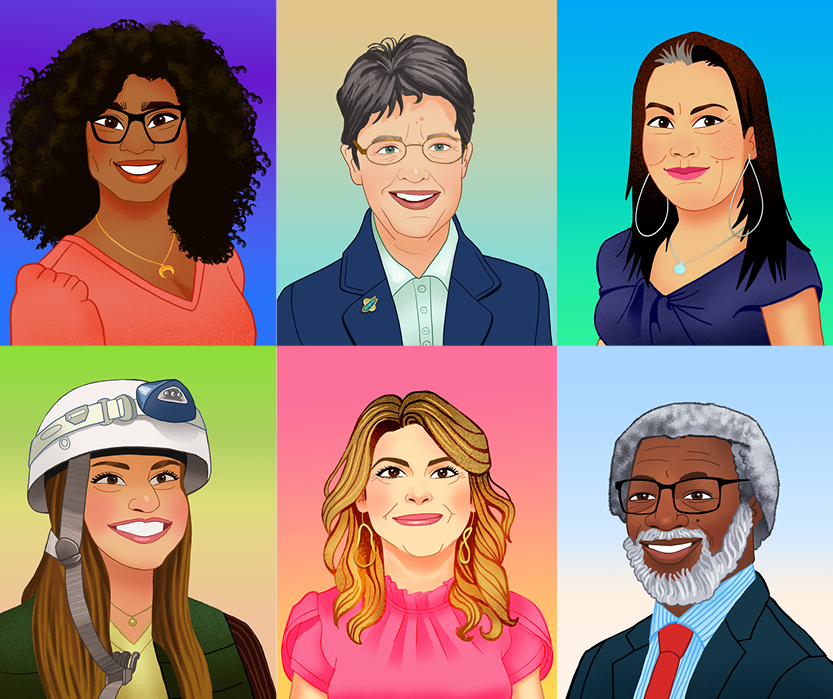