Have you ever wondered how scientists figure out how things work when they do not have a direct way of measuring the phenomena? For example, how do we know that the structure of an atom consists of electrons revolving around a positively charged nucleus, like the planets around the sun? In this activity, we will learn how to build scientific models based on observations, realize that different models can explain the same observations, and refine our models based on new data.

BEFORE the activity students should know:

AFTER the activity students should know:

The job of a scientist is to build models. Models are a way to create a mental picture of how something works. They are representations of real-life events, objects, or systems. Models can be used to gain an understanding of phenomena or processes which are difficult to observe directly. If an event occurs too slow or fast of a speed to detect directly or on a difficult scale to measure, creating a model to understand how it works makes things a lot easier. Sometimes the observable is impossible to see directly, or doing so would be too dangerous. Therefore, we use models to try to replicate those systems or events. In order to remain as accurate as possible, one must constantly refine and adjust a model when new information or data is received. For example, scientists initially believed that the Earth was the center of the solar system, with the Sun and all other objects rotating around. Astronomy knows this as the geocentric model. Scientists believed this because what they could observe was that the Sun appeared once a day everywhere around the Earth. The stars also rotated every day in a similar form. They also observed that standing on Earth, Earth did not seem to move, which then led them to believe that the Earth was stationary. Therefore, their geocentric model well predicted what they could observe at the time. However, in 1543 Nicolaus Copernicus presented a new model in which the Earth rotated around the Sun. Copernicus used the fact that observations of other planets in the solar system seen from Earth would require very complicated trajectories. Using his knowledge of mathematics and orbits, he proposed a new model to predict the same day, night, moon, planet, and star observations but with simpler trajectories.

Quantum mechanics is a field of physics that is very hard to study, especially before advancing technology, as it studies things that are on a very, very small scale, like the atom and smaller. Physicists have used models to study the phenomena of quantum physics. Another challenge of quantum physics is that, because we do not live or experience life at that tiny scale, it is not directly intuitive to predict what will happen in a quantum system. Often our observations of quantum phenomena challenge what we observe on the bigger scales. Therefore, it is challenging to create models that replicate the quantum observations and make sense in the non-quantum scale. In many quantum phenomena, there are no direct comparisons to the classical world. In the classical world, we measure things and observe behaviors to create models. However, in the quantum world, every attempt to observe what is happening alters the data, limiting the ability to refine models. One of the first examples of scientists using models to understand quantum mechanics in our classical world was with the atom model. Another example critical to the quantum mechanics field is the conundrum of an electron and how it can behave like both a wave and a particle. We will learn more about wave-particle duality in our next activity.

If you are working at home and do not have the exact materials, you can always build your own mystery tube. You will need:

2 end caps for the tube

To construct your mystery tube:

Encourage students to build their own mystery tube without revealing how you built the original tube. Alternative ways to build your tube can be found here. 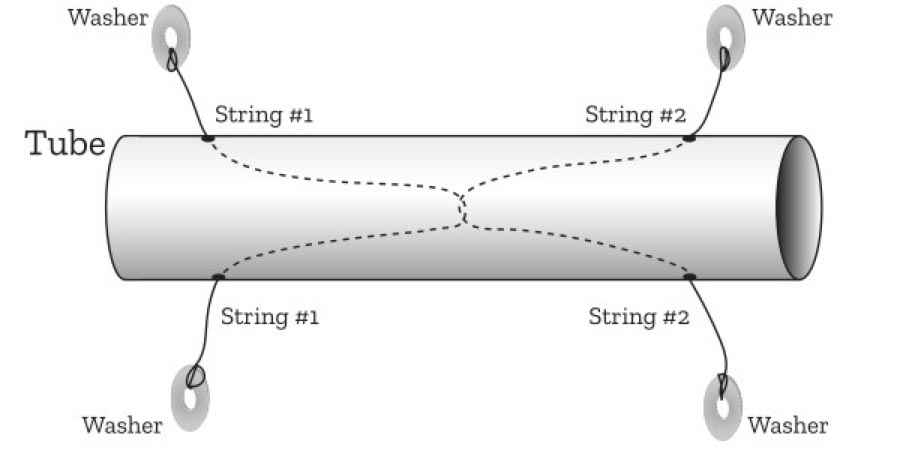 In the student’s guide, we have asked the students to develop a model that explains the behavior of the tube and then design their own tube to test their model. The idea is to encourage them to be creative, to understand how to design experiments, and think like scientists and engineers. Once they have drawn their model, ask them what materials they will need to build their own mystery tube. As the teacher, you can ask prompting questions to get them to think about the different aspects of the experiments. Below are the full instructions for one possible design.

The idea of the experiments is that they understand that different models can predict the same phenomena. They need to figure out which variables they should control for, for example, the number of pieces of strings and/or rings, that could affect the observed behavior, and consistency of the repeated experiments.

Next Generation of Science Standards