We have already looked at motion of objects falling in one direction when you drop it, or in two directions as part of a pendulum. We also looked at what happens when objects fall while also moving in the horizontal direction. In this last activity, we are combining all that knowledge to see what happens when objects move in circular motion: there are constant changes in the horizontal and vertical direction at all times during the movement, making the object follow a circular path. Examples of circular motion are carousels or merry-go-rounds in parks, a car going around a roundabout, the moon orbiting around the Earth or the Earth revolving around the Sun.

In this paper Katherine Johnson was working on finding the right moment to turn off a satellite’s engine so that it would land on a specific position on Earth. Satellites in space orbit the Earth, just like the Moon orbits around the Earth. For this particular equation, Johnson worked with elementary celestial mechanics, a branch of astronomy that deals with objects in outer space. The equation that she used is one where a body (such as one like our satellite) acted upon by a radial force of attraction proportional to the inverse square of the distance are first reviewed.  This complex equation is just the start in finding the distance of the satellite for Earth’s center. Though you may think that an ellipse is a different shape from a circle, circles are actually a special type of elliptical shape. An object that moves in a circular motion will have the same average velocity and altitude of an object in an elliptical orbit.

Mass: A measure of the amount of stuff (or matter) an object has. Not to be confused with weight or volume. This is a measure of how much actual stuff there is, not how big it is or how hard something is pulling on it.

Weight: Mass (amount of stuff) times how hard the planet is pulling on it (gravity). This means that your weight on the moon will be 1/6 of that on Earth (gravity on the moon is 0.166 times of that on Earth). However, your mass will still be the same.

Force: The push or pull an object feels because of interactions with other objects. If the interaction stops, then there is no force. It is formally defined as mass times acceleration. For example, gravity is a force that represents the pull the Earth has on all the objects.

Centripetal force: The generic name of any force that pulls objects into a circular path.

Drag force: A generic name for any force that resists the movement of the objects. For example, the air resistance that we saw when objects fell in activity one, or the resistance you feel while swimming in a pool when the water slows you down.

Acceleration: How fast the velocity is changing. When something accelerates, it changes how fast it is going or the direction in which it is moving. For a positive change in acceleration means that the object is moving faster, a car going from 30mph to 40 mph. A negative change means the object is moving slower, the car is going from 40mph to 30 mph. Finally, a change in the direction of the object’s velocity without changing speed, such as if a car is moving North and turns East still moving, then the car accelerated because the direction of the car’s velocity changed. Remember that velocity is a vector with direction and magnitude, therefore changes in any (or both) of those factors will produce an acceleration.

What happens when the centripetal force is removed?

Before the activity students should know

The Science Behind Circular Motion

In the case of the falling objects from previous activities, we learned that the forces acting on the objects were the gravity pulling the objects down and the drag force pushing the objects in the opposite direction to the fall. In the case of the pendulum, there was a force caused by the pulling of the string and the gravity force pulling the objects down. In the case of circular motion, there is a force that it is pulling objects inward, towards the center of the circle. We call it centripetal force. The existence of a force tells us that there is an acceleration: Even if the object is moving at a constant speed, like the Moon around the Earth, the acceleration comes in the form of the change in the direction of the velocity, without changing the speed. Whatever the object, if it moves in a circle, there is a force acting upon it to cause it to deviate from its straight-line path, accelerate inwards and move along a circular path. In the case of the Moon orbiting around the Earth, the force of gravity from the Earth pulls the Moon towards the Earth as it is also moving forward, causing the circular motion. The word centripetal only means center seeking, so a centripetal force is any force that pulls the object into a circular path. With a swinging yo-yo, it is the string holding the yo-yo and pulling it towards the pivot point. In the case of orbiting planets or moons, it is the force of gravity pulling the orbiting object towards the object that they are orbiting, that means the force of gravity of the Earth pulls the Moon inwards.

You can substitute the materials with any small balls or even make your own from playdough. For the plate, you can use cardboard to make a rim, the idea is to create a wall that will guide the movement of the ball and that you can also cut a hole from it to see what happens when the ball escapes through the hole.

In a classroom, get students to work in groups. Give them some time to think about examples of circular motion and have a class discussion about what forces are involved in the motion of the ball. As a class, decide how you are going to test if there is a force pulling the ball to move in circular motion — science happens in community!

To understand what happens when you remove the centripetal force, students first need to develop an understanding of what makes objects move in circular motion. For example, a marble can be made to go in a circle when you give the marble a push while it is constrained by a circular object, such as a plate. The marble will follow a circular path, because the surface of the marble is pushing on the surface of the plate.

Take a plate with a rim and put one of the balls on the plate. Give the ball a little push and observe the trajectory of the movement. 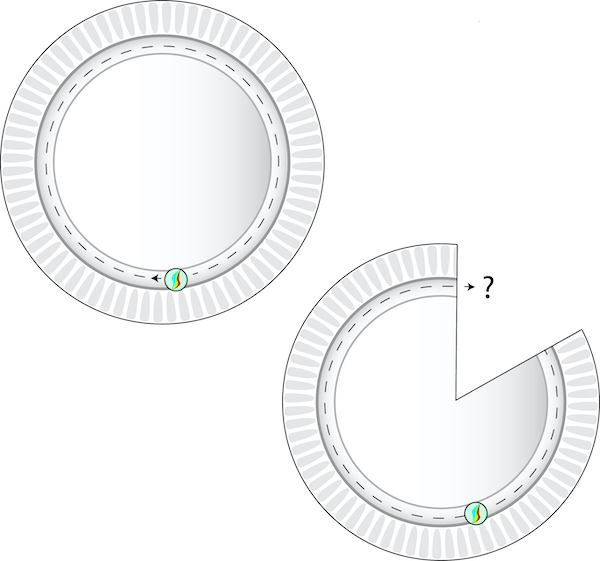 Use a second plate and make a cut out on the rim of the plate. Repeat the steps from before: give the ball a little push and observe its movement.

Is the ball still moving in circular motion? What happens to the ball when it gets to the cut out part? Ask students to draw a prediction of which direction the ball will go as it goes out through the cut out.

For experiment two, we are asking students to design an experiment to test what direction a wiffleball will fly if you let go of the string when you are spinning it. As with experiment one, we want students to reflect on what the forces are that are acting on the wiffleball when they are spinning it and what will happen if they let the string go. They should also consider whether the ball will behave differently if they spin it vertically or horizontally. Note that if they give the ball any extra push before letting the string go, the movement of the wiffleball will be affected. Students should consider the difference between just letting the ball t go versus giving it an extra push. The idea of the two experiments is to understand movement of objects in circular motion and how, in circular motion, the force is actually caused by a constant change in the direction of the velocity.

Again we ask students to consider what questions they are trying to answer, look at what materials they have, and design an experiment using those materials to answer their research question. We ask the students to use the scientific method as a guideline to design the experiment.

Make sure you have plenty of space around you to swing the wiffle ball.

You can substitute the materials with any small object you can attach a string to or even make your own from playdough.

Get your camera ready for recording

Do several tests of letting the string go when you are spinning the string vertically and horizontally. While still maintaining circular motion, you’ll want to spin the wiffleball as slowly as possible so that your group can actually determine the proper release point. Let the string go at different positions, for example when spinning up or down, or when it is farthest from you when spinning horizontally. Does the wiffleball move in different directions? Does it matter if you are spinning clockwise or counter clockwise?

Test out your guess with the wiffle ball. Do the experiment several times to make sure you know what actually happens.

Next Generation of Science Standards
NGSS performance standard HS-PS2-1, where Newton’s second law of motion is applied to the motion of an object in a circle, MP8, and SP3.

HS-ESS1-4. Use mathematical or computational representations to predict the motion of orbiting objects in the solar system.

Mechanics: Motion, Forces, Energy and Gravity, from Particles to Planets