Most people enjoy going to playgrounds and playing on the swings. But did you know that the movement of swings—or pendulums— is one of the most studied problems in physics? Understanding their movement has helped people tell time, keep the beat or rhythm in music, and protect buildings against Earthquakes. Do you know what causes a swing to move back and forth if you only raise it and release it? When a pendulum swings there are lots of variables that could go into changing how it swings. In this experiment students will learn what these variables are that affect a pendulum’s swing. In this activity, students will design experiments to identify what these variables are and how they affect the movement of the pendulum. 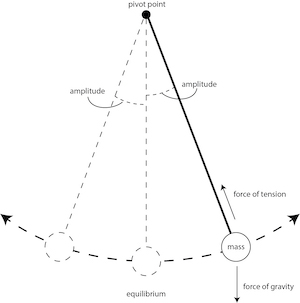 Mass: A measure of the amount of stuff (or matter). Not to be confused with weight or volume. This is a measure of how much actual stuff there is, not how big it is or how much it weights.

Force: The push or pull an object feels because of interactions with other objects. If the interaction stops, then there is no force. It is formally defined as mass times acceleration. For example, gravity is a force that represents the pull the Earth has on all objects.

Period: The amount of time it takes for a pendulum to make one whole swing; that means swinging from left to right and left again.

Pivot point: The fixed point a pendulum swings from.When you're on a swing, the swing is attached to a bar or a tree branch. As you swing back and forth, the bar above you does not move. The bar is the fixed pivot point.

Amplitude: How high a pendulum swings from the middle point. The middle point is the place where the swing is when it is at rest.

Independent Variable: This is a variable that can be changed by the person doing the experiment. For an experiment with a pendulum, some examples include length of the string, , mass (how much stuff is at the end of the string), and amplitude (how high do the pendulum starts from).

What variables affect the period of a pendulum?

Before the activity students should know

The Science Behind a Pendulum’s Swing

If you look around, there are pendulums everywhere. For example, the swings on the playgrounds or old clocks. Pendulums can be completely mesmerizing, just think of a hypnotist with a swinging watch. What makes them both so useful and so hypnotic is the extreme regularity of their swing. But what causes that? What does the pendulum’s swing depend on? How can the swing of a pendulum be changed? The simplest pendulum has a string with a mass at the end. In this experiment, you will make your own pendulum with a string and other materials to test what variables affect the pendulum’s swing. To start a pendulum swinging, the first thing to do is pull the mass back a little bit, keeping the string straight. When it is pulled back and held, gravity is pulling directly toward the ground and the string is pulling up toward the pivot point, which is your fingers holding the string in the case of the yo-yo. No matter what happens to the mass of the pendulum throughout the swing, gravity will always be pulling straight toward the ground and the string will keep pulling toward the pivot point.

When you let the mass go, gravity pulls it down and the pendulum starts to swing. As it swings, it speeds up as gravity makes it accelerate. Because the string is holding it up, it swings in an arc. When it is at the bottom of its swing the mass is moving as fast as it can and gravity is pulling straight down and the string is pulling straight up. As it swings through the lowest point it starts to swing up the other way, and gravity is now working to slow it down. When the pendulum gets to the top of its swing, it has been slowed down to a stop and the whole process repeats in the other direction.

So what affects how fast a pendulum swings? Gravity is one variable. A pendulum on the moon or Mars would swing at a different speed than one on Earth because the force of gravity would be different. What about a pendulum is space? But, considering you are not taking your class to the moon any time soon, let's concentrate on some other variables: What would happen if you changed the mass at the end of the string? In Activity One, we learned that different masses always fall at the same rate. Because of this,, changing the pendulum’s mass will not change how fast it swings.

The variable to change is the length of the string. This is the only variable (that we can easily change) that affects the period of a pendulum. The longer the string, the more time it takes for the pendulum to go through one swing. So if you want to design a swing for the playground to go back and forth faster or slower, then you need to change the length of the chains from the pivot point to the swing’s seat. If you’ve ever used a metronome while practicing music, you will remember that the metrinome’s speed is set by sliding the mass.

Pendulum motion is a neat thing to have your students explore in a freeform way. There are only really three variables they can change - mass, length and starting amplitude - and one variable they can measure, the period. In addition to teaching students about pendulums, this activity has them design their own experiment and learn that it’s only useful to change one variable at a time, that they should do repeated trials, and that there are many different ways to represent results, some more useful than others. If you have limited class time, have different groups of students test different variables.

Students should be supervised when using yo-yo strings and nuts as they can cause injury if used incorrectly.

In the student’s guide, we have asked the students to design their own experiment to test what variables affect a pendulum’s swing. The idea is to encourage them to be creative, to understand how to design experiments, and to think like scientists and engineers. They are given a set of materials that they can use to do their experiments. This is to prompt them, but they should be allowed to use other materials in their design. As the teacher, you can ask prompting questions to get them to think about the different aspects of the experiments. We have included instructions for how to set up the experiment with the just materials included in the kit.

The goal of the experiment is that students understand that mass is not a factor that affects the pendulum’s period. Using the nuts which are of equal mass, they can test if by adding more mass changes the pendulum’s swing. Students should decide which variables they should control for, such as the number of nuts, the length of the string, the angle at which the nut is released , if there is a strong air current that could affect the swing, and consistency of the repeated experiments.

We ask the students to follow the scientific method to design the experiment.

If you are working at home and do not have the exact materials, you can always substitute the nuts from some clay or playdough (see other resources for a recipe of homemade playdough). If you do not have either clay or playdough, then find two objects around the house that you can easily tie a string to. The idea is to build your own pendulum and test whether different masses (but same string length) change the pendulum’s period.

Before starting the experiment, have the students consider the following questions:

Ask students to list some independent variables., and to list ways to change these variables with the materials they have. As a class. discuss the different possibilities and how to test them, then assign a variable to test per group. After each group has completed their tests, then they can share their results and have a class discussion. Before starting the experiment, ask the students to write their hypothesis and record their experimental designs. As they conduct their experiments, students should record their observations for each test. Here are some suggestions to give students if they need prompting for their experiment design and data analysis:

Next Generation of Science Standards:

4-PS4-1. Develop a model of waves to describe patterns in terms of amplitude and wavelength and that waves can cause objects to move.

MS-PS4-1.Use mathematical representations to describe a simple model for waves that includes how the amplitude of a wave is related to the energy in a wave.

Videos of pendulums in space