In activities one and two we looked at what happens when things fall, both straight down and as part of a pendulum. Now we’re going to look at what happens when something moves in two directions, down and out! For example, when you throw a ball: the action of throwing the ball will make it move away from you (horizontally) but gravity will also pull it down, so the ball is moving down and out.

When Katherine Johnson landed a position to be a part of a team to calculate the trajectory of Alan Shepard's 1961 trip into space. That project was called the Mercury Project. Johnson knew earlier on that the trajectory of the Mercury launch would be in the shape of a parabola. A parabola is how we as physics and mathematicians describe a projectile’s motion. When Shepard had made it into space, scientists and mathematicians were stunned with the question of how Shepard could reenter the atmosphere, safely and in one piece. However in order to make the proper predictions on where Shepard could land she had to work backwards. Johnson started with the basic fundamental of projectile motion.

Mass: A measure of the amount of stuff (or matter) and object has. Not to be confused with weight or volume. This is a measure of how much actual stuff there is, not how big it is or how much it weighs.

Force: The push or pull an object feels because of interactions with other objects. If the interaction stops, then there is no force. It is formally defined as mass times acceleration. For example, gravity is a force that represents the pull the Earth has on all the objects.

Projectile: An object projected through space because of a force. A thrown baseball or a ball shot from a cannon l are good examples.

How does the mass of a projectile and its initial velocity affect how far it flies and how fast it drops?

Before the activities students should know

The Science Behind a Projectile Motion

When something is moving, it is going to continue moving in the same way unless acted on by a force. This is Newton’s first law of motion. If a hockey puck is moving on the ice, it is going to continue moving in the same direction unless it is hit by something like a hockey stick. In experiment one, there were two forces acting on the balls: gravity and air resistance. The force of gravity made the balls fall, while air resistance pushed back and slowed them down a little. But what if there were no forces? If nothing was pushing or pulling the ball, it would have happily stayed where it was.

This is true for things that are moving at a constant velocity as well, like the hockey puck. As the puck scoots across the ice, the force of gravity is pulling it down. If we assume the ice is perfectly smooth and there is no friction, then we can assume that there is no force acting in the direction the puck is moving. So it will happily stay moving in that same direction until a force does come along, maybe a hockey player trying to shoot a goal. Just because something is moving, doesn’t mean there is currently a force acting on it, and just because something is motionless doesn’t mean there are no forces acting. 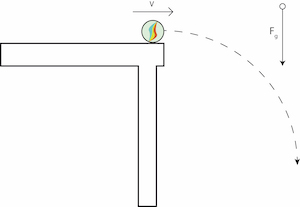 All of this is true in projectile motion as well. When something is launched off the edge of a counter or table, it has been given some initial velocity (in this experiment, by a slingshot) and then begins to fall down toward the ground. But as soon as the object leaves the table, the only forces that are acting on it are the force of gravity and the force of air resistance. There are no forces acting to change its forward motion, just its motion toward the ground. Because of this, as the ball flies through the air and eventually hits the ground, it will always be moving forward with the same velocity.

But will this forward velocity change how it falls toward Earth? No, not at all. Motion in one direction does not affect motion in another. So how fast an object falls depends only on how hard the Earth is pulling, not on how fast the ball is moving forward. In this experiment, students will see that no matter how the initial velocity or how the mass of the moving object changes, the balls will always take the same time to fall.

Make sure that students are out of the way before launching the wooden balls off of the table.

In the student’s guide, we have asked the students to design their own experiment to test if two objects of the same mass and two objects with different masses will hit the ground at the same time, when one is given an initial velocity forward and the other one is dropped from the same height. The idea to encourage them to be creative, to understand how to design experiments, and to think like scientists and engineers. They are given a set of materials that they can use to do their experiments. This is to prompt them, but they should be allowed to use other materials in their design. Below are the full instructions for one possible design. As the teacher, you can ask prompting questions to get them to think about the different aspects of the experiments. For example, asking them what they can use to make sure that the same force is applied each time to give the ball a forward velocity. The “kick” can come from a rubber band and chopstick slingshot. If they mark how far they stretched the rubber band, then they can use that as an initial position of the rubber band for each shot. The farther the rubber band is pulled back, the harder the ball will be hit and the faster it will go forward when it leaves the table, so they can test how changing the initial position of the rubber band affects the distance at which the balls hit the ground. They can also test the same initial position with different ball sizes. Also, if available, students can experiment with changing the thickness of the rubber bands to determine how that would affect the initial velocity of the balls.

The goal of this experiment is for students to understand that mass and velocity forward are not factors that affect how objects fall. They need to figure out which variables they should control for, such as dropping the balls at the same time and from the same height, if there is a strong air current that could affect how the balls fall, and consistency of the repeated experiments.

We ask the students to follow the scientific method to design the experiment. 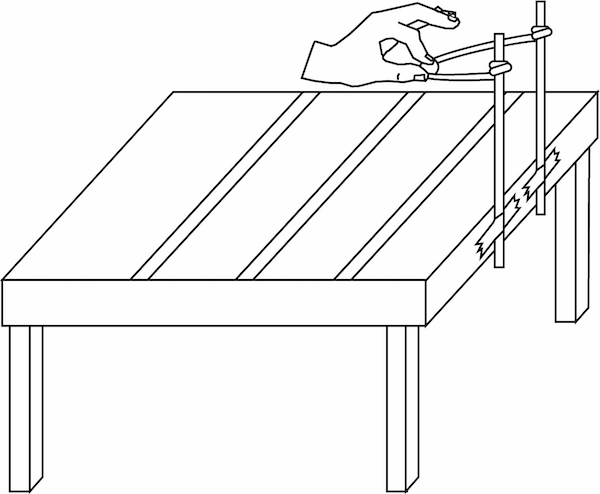 In case you do not have access to chopsticks, you can use any set of sticks or structure that will allow you to build a slingshot. You can also do the experiment just by using your hands to flick the balls from the table. The idea is to provide the balls with some initial velocity so that they start moving in the horizontal direction and have enough velocity to completely reach the end of the table and start falling.

You’ll be making two slingshots out of rubber bands and chopsticks.

Students should pay attention to what variables they are controlling and the distance at which the balls are falling from the point where they leave the table. Does it depend on how different the mass of the balls are or the initial horizontal velocity given? Which ball hit the floor faster, the lighter one or the heavier one, or the one with the biggest initial velocity?

Next Generation of Science Standards:
3-PS2-2 Motion and Stability: Forces and Interactions Make observations and/or measurements of an object’s motion to provide evidence that a pattern can be used to predict future motion.

Make sure you have plenty of space in front of your slingshots, your projectiles can fly very far.