Scientists use experiments to develop an understanding of the world around us. We propose hypotheses and design experiments to test them or we ask questions like “why do objects/things always fall to the ground?”. Often the technology that we can use to do our experiments changes and evolves, which allows us to refine our experiments and therefore expand our knowledge and understanding of the world. What is light? Have you ever wondered how light travels, whether it moven a straight line or if it spreads in multiple ways? Two of the questions scientists considered in the early 1700s were “what is light?” and “how does it travel?” For many years, there were different theories, and physicists designed many experiments to test the different hypotheses. Today you are going to follow in their footsteps to answer these questions yourself.

BEFORE the activity students should know:

AFTER the activity students should know:

The concept behind how light travels and behaves has been one of physics’ greatest mysteries. In the world we experience every day, we see that objects, like a chair or a rock, can only be in one place at one time. We can say that these objects behave like a particle, which is a tiny object that is characterized by only being in one place at a time. On the other hand, we have things that can be at different places at the same time, such as waves. Have you noticed what happens when you throw a rock in the water? It makes waves that spread in a ring and grow as they move outward. In physics, waves are described as the spread of the disturbance or perturbation of something, often energy. When you throw a rock in the water, you are transferring some energy of the movement of the rock into the water, which causes the water to move around to disperse that energy.

We can see how a rock behaves differently from a wave. But scientists could not agree if light behaves like a particle or a wave In 1801, Thomas Young, a British scientist, was convinced that light was a wave, and he designed his famous double-slit experiment. In this experiment, Young would shine a light source onto a screen that had two small slits close to one another to see the reflection of the light after passing through the slits in the wall behind it. What he saw was what physicists now call an interference pattern. Let’s go back to the ripples in the water. If we throw a rock in the water, we see that it creates waves that have crests and troughs. If we throw a rock next to it, we will see that it also creates crests and troughs. As the waves spread, we will see that the waves that originated from one rock will start to cross the path of the waves created by the other rock. When the crests of waves created by rock A cross the troughs of waves created by rock B, they will cancel each other out. When the crest of waves created by rock A crosses the crest of waves created by rock B, then they form a taller crest. Then you can imagine what happens when the paths of two troughs cross each other: they forma deeper trough. See image below.

If instead of thinking of water waves now we think about light, then what we expect to see on the wall will be lines of bright light and lines with no light. That is exactly what Young’s double-slit experiment showed. Confirming the hypothesis that light behaves as a wave. So then, that’s it, right? Light is a wave! Yes, but…

In order to be sure, other scientists decided to explore the subject a bit further. In 1909, Geofrey Taylor repeated Young’s experiment and took photos of the light coming out of the slits. Initially he saw the same interference patter as Young. But when he dimmed the light to very low level, the photos were of little points, like particles hitting the screen. If he left exposure of the photo for long enough, the little points started forming the interference pattern. Therefore, he demonstrated that light can behave both as particle and wave. Many other scientists throughout history have tested this concept with electrons, molecules, and atoms always seeing the same result. Now it is time for you to check it out!

Note: You can find other DIY setups that use old DVD discs, aluminum foil, or even cardboard paper. We have found this the easiest and most reliable form of doing it.

A demonstration can be found here: https://www.youtube.com/watch?v=kKdaRJ3vAmA

Do not point the laser at anyone, and do not look directly into the laser.

In the student’s guide, students are tasked with developing an experiment, following Young’s experiment, to see if they can determine whether light behaves as a particle or a wave. The idea of this experiment is that students start to form a model of the light’s behavior as a particle and as a wave.

In this experiment, students will be asked to explain the model of light. Before the experiment starts, ask students to predict what they expect to see when they shine a laser onto a screen without an obstacle and then with the double slit. Ask them to sketch their predictions and provide an explanation.

Once predictions are complete, let students carefully shine the laser onto a wall or a screen. Ask them to write down their observations and how what they saw compares to models of particles (thinking about sand grains as particles) and waves without obstacles.

Next, ask students to build their double slit diffraction set up. Take the piece of copper filament/strand and place it across the laser pointer, where the beam comes out.

Use electrical tape to secure the copper strand to the laser pointer on the top and bottom. Then add extra tape to the side to make a smaller aperture for the beam to go through. See pictures below. 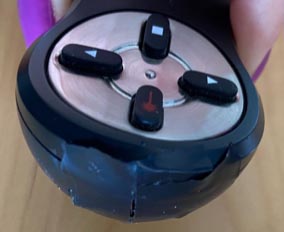 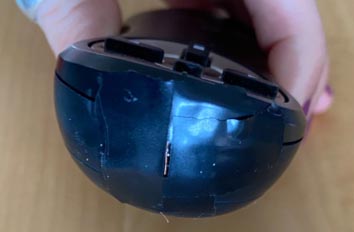 Now ask students to write their predictions of what they expect to see now with the laser light going through the double slit, and how it will be similar to the particle or wave models. Ask them to sketch in their notebooks the patterns that they predict will appear.

Once students have submitted their predictions, they can shine the laser light onto the screen or wall. You should see a horizontal pattern of dark and bright lines or dots that represent the crests and troughs of the interference of the light as it passess through the doble slits. Patterns are easier to see if the lights are off and the wall or screen is flat with no edges that interfere with the light as it passes through the double slit.

WARNING: Be careful to not shine the laser on people’s faces or eyes.

Figure X and Y are two examples of what you should see on the screens/wall. These patterns were created with the laser pointer set up shown above. Picture Z shows a double slit pattern from a physics lab. Ask students to draw what they see and compare to their predictions and also to what they expect particles or waves will be like. Then ask how their observations explain the need for a theory of wave-particle duality of light.

This double slit interference pattern was recorded in a laboratory. (credit: PASCO)

Next Generation of Science Standards

HS-PS4-3. Evaluate the claims, evidence, and reasoning behind the idea that electromagnetic radiation can be described either by a wave model or a particle model and that for some situations one model is more useful than the other.

Engaging in Argument from Evidence