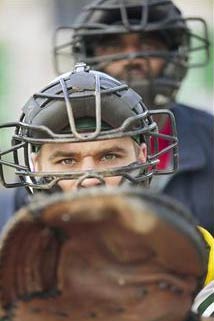 Editor's note: In the October 1999 issue of APS News, we announced a new contest for stories or tales designed to teach specific concepts or principles in physics.

Peter Siska, a professor of chemistry at the University of Pittsburgh, eagerly submitted the following entertaining - if highly theoretical - account.

1. Pitcher arguing with home plate umpire: P: "Whaddaya mean, ball three? The chances were two in three it was a strike!"

2. Fastball pitchers are at a disadvantage - their pitches don't broaden so much and are easier to hit.

3. Only 300 lb. (136 kg) catchers who keep shifting from foot to foot now make it to the majors (NQL or AQL), since they provide localized targets [deBroglie wavelength l = 10-3 cm) for the pitcher. The pizza-pie catcher's glove makes a comeback.

4. Baseball bats (˜800 g), when swung quickly, are much more localized than the ball when it arrives at the plate. Unfortunately, a reduced-mass correction must be applied. Bunting is now difficult in the extreme.

5. Skilled hitters have an instinctive feel for swatting at the waveball, although even perfect contact occasionally results in a swinging strike, due to tunneling of the waveball through the bat. Less skilled hitters often blame their failures on tunneling.

6. When a waveball is hit squarely, you can hear a loud crack, and see the waveball suddenly become sharply outlined before it whirs out into the playing field and becomes broadened again. If the ball tunnels through the outfield wall, it's a ground-rule triple. What used to happen only in Wrigley Field is now a regular occurrence in all the parks.

7. Games are best played in dim light, so that visible protons (hv > 1012J!) do not disturb the flight of the ball too much. One season so many games were "sunned out" that all the games are now played at night. Watching a ball game is now like watching in old black and white movie of street life at night.

8. Only the most skilled defensive players become outfielders; finely honed instincts and reflexes are required to snare a broadened waveball, which might have a breadth approaching 6 feet (1.8 m). Last year's Golden Glove center fielder had a fine fielding fraction of .575. Balls hit through infielders' legs are a special problem due to diffraction interference, although it cannot be said which infielder committed the error. Throwing out runners from the outfield is a rarely accomplished feat.

9. The best infielders now have careers lasting only four or five years, because they must now dive even for waveballs seemingly out of their reach, on the chance that the ball will show up in their glove. Only fast hard throws to first can be snagged by the first baseman. Whether the batter and ball can arrive at first simultaneously in the reference frame of the umpire is left for a future project on relativistic baseball.

10. Foul poles are 7 feet (2 m) wide, to accommodate the typical waveball breadth should it reach the fence. Foul line umpires have developed three signs: both hands towards foul territory, both hands toward fair, and both hands straight up. In the third case, the defensive player closest to the ball has to compute the probability that it is fair, and then choose whether to play it or not. Of course, first he has to find it.

10-1/2: Bleacher bums just hold their cupped hands up on a long hit. Their chances at a souvenir are just as good as the next guy's.

Author's Disclaimer: Unsponsored speculation: Proposal to the NSF was judged meritorious but not fundable. Research was performed in despair after a players' strike shortened baseball season and canceled that year's World Series.