I am struck by a combination of statistics which were published in the May 2000 issue of APS News.  The number of pages published annually in PR and PRL have now reached nearly a hundred thousand, and an astounding twelve thousand abstracts were presented at APS meetings. This could be construed as a positive development if the number of American physics researchers, undergraduate majors, graduate students, or government funded programs were growing at a similar rate, but all of these measures are comparatively flat. Although the globalization of physics helps explain some of the increase, the majority has to be attributed to greater "productivity" from existing researchers. Based on numbers given in the issue, the acceptance rate of the flagship APS journals is now well over 50%.

Surely the quality of the articles submitted cannot be increasing so dramatically. Has sympathy to the maxim "publish or perish" caused editors to accept papers of increasingly narrow scope? Do researchers increasingly feel compelled to try the most prominent journals first, rather than those targeted to a more specific audience? Is concern for showing gains in a field which has been stagnant in size, influence, and finances for the past thirty years driving the explosive increase in the number of papers and presentations? I don't know the answer to these questions. But whatever the reason, the sharp rise in page count and number of abstracts implies either a lowering of standards or the publication of increasingly specialized material.

Every discipline needs forums where major advances of general interest to its practitioners can be described. PRL, PR, and the APS meetings should serve this role, promoting "the advancement and diffusion of physics" by highlighting the most significant work in the field, leaving developments of a more incremental nature to more specialized journals and conferences. If APS decides that its journals and conferences should publish all discoveries which advance physics, even if the material is incremental and highly specialized, this crucial role will inevitably go unserved.

Dr. Calvin's letter makes a number of points that can be illuminated by a further perusal of the statistics of our publications. Figure 1 shows the total number of manuscripts submitted to our journals for each year since 1983. The yearly numbers are broken down according to the part of the world from which the manuscripts originated: blue for the United States, red for western Europe, and gold for the rest of the world. The Figure shows that most of the growth of Physical Review has come from papers submitted from outside the United States. Indeed, since 1993, there has even been a decrease in U.S. papers. I hesitate to give an interpretation to these statistics, as most of the explanations I have come up with in the past have, on closer examination, turned out to be wrong. That said, I venture that the strong reputation of our journals, together with an increased ease of electronic communication, has led researchers around the world to submit their best work to us. Another factor could be the revolt by librarians around the world against price increases by publishers. The APS journals have been among the least costly, and this, coupled with the quality of the work presented, has increased their reputation. 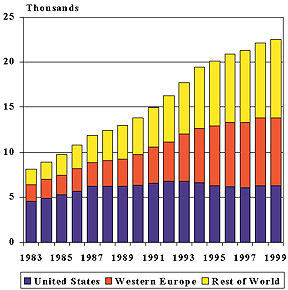 Figure 2 shows a measure of the yearly acceptance rate for submitted papers. Contrary to Dr. Calvin's hypothesis this rate has declined slightly, from about 65% to below 60% in the last decade, and is well below the 75% rate in the good old days of the sixties. This varies across the different sections of Physical Review and is, as expected, lowest for Physical Review Letters, where it stands at about 40%. I don't believe that these statistics support Dr. Calvin's explanations for the May 2000 APS News figures. 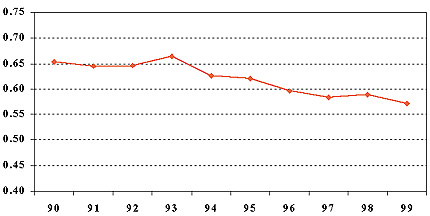 Editor's Note: With regard to the question about meetings, it has long been APS policy that any member is entitled to submit an abstract and be scheduled for a contributed talk. The organizers decide when and where the talk will be given, but not whether.