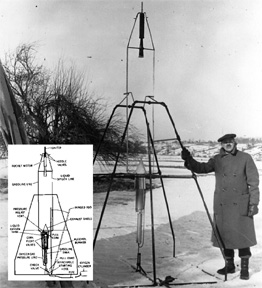 For hundreds of years man lived with the deficiencies of the solid, gunpowder type rocket first developed by the Chinese in the 13th century, which were notoriously inaccurate and had declined steadily in use as artillery improved in the late 19th century. One man who did not accept these limitations was Dr. Robert H. Goddard, a New England physics professor and American rocket pioneer who has become known as the father of modern rocket propulsion. His groundbreaking work helped pave the pay for the now booming significance of rocket propulsion in the fields of military missilery and the scientific exploration of space.

Born in 1882 in Worcester, Massachusetts, Goddard was staying with his family at the suburban home of friends near Worcester when, on October 19, 1899, he climbed into an old cherry tree to prune its dead branches. Instead, he gazed at the sky and began daydreaming about the possibility of a device capable of one day going to Mars. "I was a different boy when I came down from that tree," Goddard once said, and he marked the day as an anniversary and private holiday for the rest of his life, since it was then that he essentially dedicated himself to the realization of space flight.

Goddard first attracted public notice for his work in rocketry in 1907, in a dramatic cloud of smoke from a powder rocket fired in the basement of the physics building of Worcester Polytechnic Institute. To their credit, school officials did not expel him, subsequently granting him several leaves of absence to sustain his lifelong interest in and devotion to rocket propulsion.

As early as 1909, Goddard considered the idea of a liquid fuel rocket utilizing hydrogen and oxygen. He continued his research after joining the faculty at Clark University in Worcester. In his studies he recognized that solid fuels produced a lower exhaust velocity than could be obtained by the use of liquid fuels. However, a liquid fuel requires a continuous source of oxidizer to be able to burn at a rate capable of producing the rocket thrust desired. Thus, a means for combining the fuel and the oxidizer at the proper rates in the combustion chamber had to be developed. The high pressures created by combustion required that the fuel and oxidizer be injected into the chamber under even higher pressure.

After a number of design attempts, Goddard finally chose gasoline as the fuel and liquid oxygen (lox) as the oxidizer. Below - 297°F oxygen is a liquid at atmospheric pressures. At higher temperatures it vaporizes, and produces tremendous pressures in closed containers. Goddard used the pressure of this gas to push both liquids simultaneously from their tanks, through separate pipes, to the combustion chamber where they mixed and burned. To speed the vaporizing of the lox, he applied heat with an alcohol burner.

There was a pipe connection for the pressurizing gas between the lox tank and the gasoline tank. Safety required that neither liquid should pass through this pipe and mix with the other before entering the combustion chamber. Once the rocket left the ground, this gas pressure would be the only means for pumping fuel and oxidizer. Before launch, however, it was necessary to pressurize the system from an oxygen cylinder located about 30 feet from the rocket. Heavy rubber tubing fed the oxygen into the rocket's pressure line. As the rocket began to rise, this hose had to be pulled free. The resulting opening was rigged with a flap check value to slam shut and prevent loss of pressure. The combustion chamber was equipped with an igniter system containing match heads and black gunpowder to provide the starting fire for ignition of the lox and gasoline when they were forced into the combustion chamber.

Only a few steps were necessary in the countdown and launch. First, an assistant using a blowtorch on a long pole reached up and heated the igniter casing until the enclosed match heads caught fire and ignited the black powder. He then closed the pressure relief vent on the lox tank and quickly lighted the alcohol soaked cotton in the burner. Next, Goddard piped oxygen from the cylinder to the propellant tanks at 90 pounds per square inch pressure. This forced gasoline and lox to the combustion chamber, where the igniter was still burning. With a loud roar, the rocket motor fired. When the rocket motor's thrust exceeded the weight, it rose a few inches from the ground, tethered only by the hose. With a long rope, Goddard pulled a hinged rod that yanked the hose away, and the rocket was free to fly. The swing of this rod also unseated a spring loaded valve, allowing lox to drip into the heated chamber surrounding the lox tank. The lox flashed into vapor, and the resulting gas pressure fed the liquids to the combustion chamber.

Thus, after 17 years of theoretical and experimental work, Goddard finally achieved flight of a liquid fueled rocket on March 16, 1926, at his Aunt Effie's farm in Auburn, Massachusetts. Goddard recorded the occasion in his diary. "It looked almost magical as it rose, without any appreciably greater noise or flame, as if it said, 'I've been here long enough; I think I'll be going somewhere else, if you don't mind,'" he wrote, adding, "Some of the surprising things were the absence of smoke, the lack of very loud roar, and the smallness of the flame."

After 2½ seconds of flight, the fuel was expended, the roar ceased abruptly, and the rocket fell to earth 184 feet away. It had reached an estimated speed of 60 miles per hour and the height of 41 feet. Although rudimentary and far from a practical design, Goddard's basic concept was validated, and the event is considered comparable in its significance to the Wright Brothers' achievement of manned flight at Kitty Hawk. In the ensuing years, Goddard continued to develop rockets, controlling their motion by gyroscope, steering them with small vanes thrust into their exhaust jet, and building larger and faster rockets.

Yet it fell to others to fully realize his dream. Eighteen years after his successful demonstration at Auburn, Goddard's pioneering achievements came to life in the German V-2 ballistic missile, and he went on to be granted 214 separate patents in rocketry. Alas, the man who in 1920 envisioned a rocket reaching the moon did not live to see the arrival of the modern space age; he died in 1945. NASA's Goddard Space Flight Center in Maryland was established in his memory in 1959, and he is recognized worldwide as the first scientist who not only realized the potentialities of missiles and space flight, but also contributed directly in bringing them to practical realization. In the words of Goddard himself, "It is difficult to say what is impossible, for the dream of yesterday is the hope of today and the reality of tomorrow."