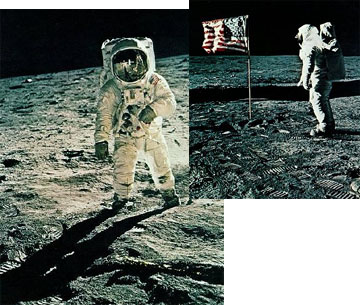 Images from the first manned lunar landing in 1969. See more from NASA.

America has long had a love affair with space, dating back to the Sputnik Era in the 1950s. In May 1961, President John F. Kennedy issued a challenge and made a public commitment to land a man on the Moon by the end of the decade, a notion that captured the nation's collective imagination and fueled support for Apollo, an ambitious lunar landing program that culminated in 1969 with the fulfillment of Kennedy's vision: the first manned lunar landing.

The beginnings of the Apollo program were marked by tragedy on January 27, 1967, when three astronauts were killed in the Apollo 1 fire. However, the program quickly rebounded from the loss, and a year and a half later the first manned mission, Apollo 7, was launched: an Earth-orbiting mission that did not travel to the moon. The Apollo 8 and Apollo 10 manned missions did travel to the moon, but did not land on the lunar surface.

Amid much excitement and unprecedented worldwide media coverage - with one million people and half of the members of Congress tuned in to the event at the Kennedy Space Center in Florida - Apollo 11 was launched on July 16, 1969, with three astronauts on board what was then the most powerful rocket ever built. Commander Neil A. Armstrong, Command Module Pilot Michael Collins, and Lunar Module Pilot Edwin "Buzz" Aldrin spent the next three days en route to the moon on a lunar trajectory, traveling 24,200 miles per hour. Every morning Mission Control would wake the crew and give them a news report. Color TV telecasts were made daily to a worldwide audience as the astronauts conducted their routine chores around the spacecraft.

The spacecraft reached the moon on July 19th, and the following day Aldrin and Armstrong entered the lunar module - dubbed Eagle - and separated from the command module, leaving Collins to orbit the moon until their return. The site of the first lunar land was called Mare Tranquilitatis, chosen for its smooth and level area, despite its high density of craters. In fact, the module had to be manually piloted by Armstrong at one point to avoid a sharp-rimmed ray crater measuring 180 meters across and 30 meters deep. He landed the module about 6 kilometers from the planned landing site, and reported, "Houston, the Eagle has landed."

Finally, at 10:39 PM EST, Armstrong opened the outside hatch of the lunar module and squeezed through the opening, proceeding slowly down the 10-foot, 9-step ladder. His progress was hampered by the extensive life support and communications equipment he carried on his back. But at 10:56 PM, in an historic moment televised live around the world, Armstrong took his left foot off the module footpad and placed it on the moon's surface, and the entire world heard his famous words: "That's one small step for man; one giant leap for mankind." It was the first time in history that man had set foot upon anything not originating from the Earth.

After surveying his surroundings and testing his movements in the lunar gravity, Armstrong took samples of lunar soil and rocks. Aldrin soon joined him on the lunar surface, and the two astronauts planted the US flag in the surface. They also conducted planned scientific experiments, including setting up a telescoped pole with foil hanging from it to collect particles from the solar wind in the foil and return them to Earth. A seismic detector was also set up to measure "moonquakes" and meteorite impacts, along with a laser reflector, intended to bounce laser beams off the moon and enable scientists to more accurately measure the distance between the Earth and the moon.

After about 24 hours on the moon's surface, Armstrong and Aldrin returned to the lunar module, blasted off the lunar surface, and redocked with Columbia, still being manned by Collins. The return trip to Earth lasted about 60 hours, and at 12:40 PM on July 24, Apollo 11 splashed down in the Pacific Ocean, just south of Hawaii.

Apollo 11 was followed by five more lunar landings until the entire Apollo program was canceled in 1972, but none proved as successful, or as popular with the public, as that historic mission. Apollo 11 not only marked the first men on the moon, but also the first return of samples from another planetary body (basalts estimated to be 3.7 billion years old). They left behind the American flag, a TV camera, two still cameras, experimental devices, and the descent stage of the lunar landing module with a plaque affixed its leg, bearing a map of the Earth and this inscription:

Here men from the planet Earth
First set foot upon the moon
July 1969 A.D.
We came in peace for all mankind