The hundredth anniversary of Enrico Fermi's birth took place on September 29. The event was commemorated at Fermilab on the 28th, and at the University of Chicago (where Fermi taught and where he developed the first nuclear reactor) on the 29th. Fermi was President of the APS in 1953, the year before his death.

Shown here (below left) cutting the birthday cake after Fermilab's centennial symposium are Mildred Dresselhaus of MIT (APS President in 1984) and Michael Witherell, Director of Fermilab. As a student, Dresselhaus took a course on quantum mechanics from Enrico Fermi at the University of Chicago.

Below (right) is a picture of Fermi that appears on a recently issued stamp. It contains an amusingly heterodox formula for the fine-structure constant in the upper left. 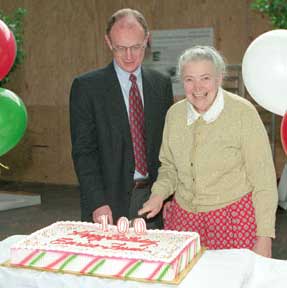 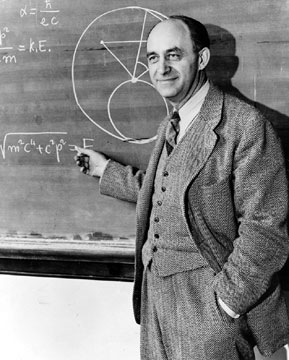