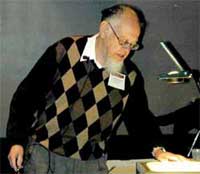 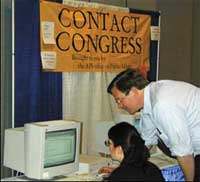 Dear Congress...
DPF Chair-Elect Jonathan Bagger ofJohns Hopkins University watches as an April meeting attendee writes to her representative. With the help of a conveniently-located bank of computers, more than 1500 letters to Congress in support of the agencies that fund physical science were written at the April meeting.

Faster, Faster
At the APS Teachers’ Day at the April meeting, workshop participants took to the halls to simulate the motion of beam packets in a particle accelerator. Andrea Palounek, of the Los Alamos National Laboratory, led the workshop.

And the Winners Are...
The social hour sponsored by the Forum onGraduate Student Affairs at the APS April meeting featured the“FGSA Physics Quiz” in which teams of contestants vied for prizes such as a magnetically levitating “anti-gravity” top, and a “neutron”bounce ball. The first- and second-place finishers are pictured here. At right is the first place team from SLAC: Nicolas Berger (left) and Joerg Selzer (right); at left is the second-place team from UNC Chapel Hill and TUNL, consisting of (l to r): Ryan Fitzgerald, Carrie Rowland, Doug Leonard, and Brian Fisher.