If the radiance of a thousand suns
Were to burst at once into the sky,
That would be like the splendor of the Mighty One...
I am become Death,
The shatterer of Worlds.
-The Bhagavad-Gita

The atomic age has its roots in the late 1800s, with the early work of Henri Becquerel and the Curies on radioactivity. The work of those who came after revealed that radioactive decay releases an enormous amount of energy compared to chemical processes. However, this release is gradual; thus, the possibility of "atomic energy" existed as a concept, but without any known means of bringing it about, even in theory. That changed in September 1933, when Hungarian physicist Leo Szilard conceived of the notion of using a chain reaction of neutron collisions with atomic nuclei (fission) to release energy much more quickly, a process that could lead to a bomb.

Szilard's insights predated the discovery of fission by six years. That discovery, publicly announced by Niels Bohr in January 1939, came just as Nazi Germany decided to abandon expansion by intimidation and resorted to armed conquest, and Japan invaded Manchuria, leading to the eruption of World War II. In consequence, the US government ramped up development efforts for an atomic bomb under the Manhattan Project. And the culmination of the Manhattan Project was Trinity, detonated at 5:29:45 am on July 16, 1945, at the Trinity site in a central New Mexico desert called the "Jornada del Muerto," or "Walk of the Dead." 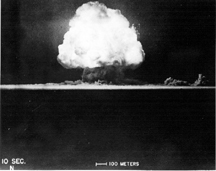 The nuclear bomb when exploding (above) and (below).

To help prepare the instrumentation for the planned Trinity detonation, the so-called "100 Ton Test" was conducted on May 7, 1945, in which 108 tons of TNT stacked on a wooden platform was detonated 800 yards from Trinity ground zero. The pile of high explosives was threaded with tubes containing 1000 curies of reactor fission products. The test allowed the scientists to calibrate the instruments used to measure the blast wave, and gave them some indication of how fission products might be distributed by the explosion. Concurrent with preparations for the Trinity test, preparations were also being made for the delivery of operational atomic weapons to Tinian Island in the Pacific for use against Japan at the earliest possible date.

On July 14, Gadget, the first atomic bomb, was hoisted to the top of the 100-foot test tower, and the detonators were installed and connected as the final test preparations began. Just before sunrise, Gadget was detonated, vaporizing the steel tower with an explosive yield of 20 to 22 kilotons. The mushroom cloud rose to over 38,000 feet within a few minutes. Several of the observers standing towards the back of the shelter were knocked flat by the blast, and the heat of the explosion melted the sandy soil around the tower to form a mildly radioactive glassy crust known as "trinitite."

The shock wave broke windows 120 miles away and was felt at least 160 miles away, and the blast created a flash of light that was seen over the entire state of New Mexico, as well as parts of Arizona, Texas, and Mexico. A military policeman on hand for the test described the heat as being "like opening up an oven door, even at 10 miles." Another witness to the explosion told of how, even 10 miles away, "there was the heat of the sun on our faces. Then, only minutes later, the real sun rose and you felt the same heat to the face from the sunrise. So we saw two sunrises." 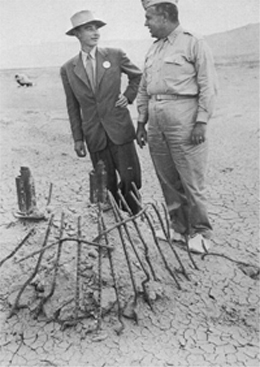 Trinity was not made public until August 6, just after a second bomb, nicknamed "Little Boy", was detonated 1850 feet over Hiroshima, Japan, killing an estimated 70,000 to 130,000 people and destroying a large portion of the city. On August 9th, "Fat Man" was detonated over Nagasaki, killing about 45,000 more Japanese, prompting Japan to surrender on August 14. These were the only nuclear weapons ever to be used in a time of war. Since Trinity, there have been fewer than 1900 known nuclear explosions worldwide.

Today, no one would argue that the successful development of the atomic bomb changed the face of the modern world forever. "In some sort of crude sense which no vulgarity, no humor, no overstatement can quite extinguish, the physicists have known sin," J. Robert Oppenheimer famously observed in the aftermath of the Trinity test. "And this is a knowledge which they cannot lose."