The California recall election was a laughing matter to many, a veritable circus of replacement candidates of dubious celebrity and questionable qualifications for the job. But for physics departments across the state, the ongoing budget woes that spurred angry voters to action in the first place remain deadly serious. 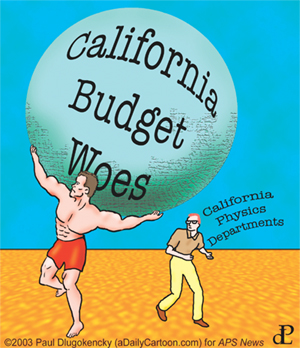 Once the flagship of state-funded education, boasting 44 Nobel Laureates and some of the top research facilities in the nation, the University of California (UC) system is simultaneously facing an enrollment boom and deep budget cuts. The California State University (CSU) system, already stretched thin with its 23 campuses and network of community colleges, is facing similar drastic cuts.

In August, then-Governor Gray Davis approved a particularly stringent 2003-2004 budget, in response to a lackluster California economy that generated a record $38 billion deficit. After the dust settled, the $2.9 billion state funding package for the UC system lost $410 million in cuts, including a $10.8 million reduction to its $259 million general research fund. This comes on the heels of an $18 million midyear reduction, and last year's 10% budget cut.

The CSU system has been hit just as hard, according to Chris Gaffney, chair of the physics department at CSU-Chico, losing $304 million of its $2.6 billion state funding, while simultaneously being expected to absorb a 4.3% growth in enrollment. Such a large reduction in state funding would have been truly devastating, except for a 32% increase in fees (tuition) this year, raising the yearly cost from $2100 to $2800. These large statewide cuts translated into, among other things, the CSU Chico physics department's operating budget being slashed by 20%. "It's part of a trend that's been going on for a number of years: an ever decreasing percentage of the state's general fund has been devoted to higher education," says Gaffney, adding that the current troubles "are really exacerbating the problem."

The situation is only going to get worse, with a projected $8 billion state budget shortfall for next year, that may rise to $14 billion with governor-elect Schwartzenegger's promised recision of the car tax. The various institutions in the UC and CSU systems are responding to the expected shortfalls in numerous ways. At Berkeley, the physics department's budget was slashed 5% this year, according to department chair Christopher McKee. To absorb the cut, several staff positions have not been filled, straining an already overworked staff, and several courses have been eliminated, primarily duplicate sections of required courses. There are also a handful of non-required upper division courses being taught less frequently, "because we just don't have enough faculty and lecturers to cover them," says McKee.

An outside review panel recently concluded that Berkeley's physics department was in a state of "genteel decline," losing six of about 50 tenured professors over the last four years to top-notch private universities like Harvard, Cornell and Caltech. The department also suffers from aging facilities. The newest of its physics buildings is 40 years old, and while the university has been investing heavily in life sciences facilities and programs, physics spending has lagged. More potential physics graduate students are declining enrollment after being accepted into the graduate program. Meanwhile, part of the Berkeley tuition increase will go to a scholarship fund to benefit economically disadvantaged undergrad students.

McKee concedes that there have been problems in the department, but cites several positive actions as a result of the panel report. The Berkeley administration allocated $12 million to renovate one of the oldest physics buildings, built in 1942 and slated for a seismic retrofit next year. And the department has successfully hired several junior faculty members to fill positions vacated by retirements and faculty wooed away to other institutions. "The most important mark of how well the department is doing is our ability to attract the best and brightest of the young up-and-coming physicists," says McKee. "By that score, we're still doing extraordinarily well."

Other campuses haven't fared so well. On August 1, UC Riverside eliminated 18 of its 135 state-funded technical research slots, although many of the ousted staff members have been shifted to soft money for the time being. Barry Klein, vice chancellor for research at the University of California, Davis, told Science magazine that his institution expects to lose 72 faculty slots and 28 staff positions over the next three years. CSU Chico has eliminated its only physics course for nontechnical majors, eliminated elective courses ["That which is not required is forbidden, " Gaffney ironically notes], and increased class sizes of the surviving courses.

These developments are particularly worrisome to Gaffney, since the CSU system's primary mission is undergraduate education and training future high school teachers. "It's a 19th century industrial model: punch out the students at a cheaper rate per unit cost," says Gaffney. "In my view, it degrades the whole educational process."

The UC system also has a newly appointed president, physicist Robert Dynes, formerly chancellor at UC San Diego. Dynes has said that his foremost concern is maintaining the university's quality-even if that means restricting enrollment instead of admitting all eligible students. "We cannot continue to grow in student body and shrink in budget. It's unstable," Dynes told the Contra Costa Times in August when his appointment was announced. Above all, Dynes is trying to maintain an historical perspective. "There have always been problems," he told the Los Angeles Times in June. "The University of California has faced different challenges at different times, and it has always come through strong."