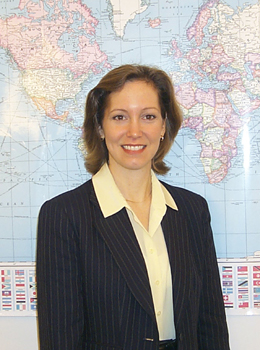 Amy Flatten, formerly with the Office of Science and Technology Policy (OSTP), has joined the APS as its new Director of International Affairs.

Flatten begins her new position February 1, 2004, replacing Irving Lerch, who established the Society's international efforts more than ten years ago and retired in December [see APS News, January 2004]. Since receiving her PhD in Engineering Science and Mechanics from the Georgia Institute of Technology, Flatten has worked in private industry, academia, and the Federal government. Since 1995, Flatten has also held a faculty position with the Johns Hopkins Part-Time Engineering and Applied Sciences Program, where she received the 2000 Excellence in Teaching Award.

Serving nearly five years with the OSTP, Flatten branched beyond the scientific disciplines of her fiber optic PhD research to manage a breadth of international S&T initiatives involving government, academia, and industry on behalf of the President's Science Advisor. As OSTP's lead on US-Russian scientific relations, she particularly focused upon US-Russian physics cooperation, where she promoted new opportunities for collaborative research and worked with diverse government representatives at all levels to remove obstacles to establishing a Memorandum of Understanding in High Energy and Nuclear Physics. Her responsibilities have also required multiple trips to Moscow for meetings with Russia's S&T Ministry to establish high-priority scientific issues for the US-Russia Joint S&T Committee, co-chaired by Russia's S&T Minister and the US President's Science Advisor.

In addition to her bilateral activities with Russia, Flatten was responsible for bringing together multiple Federal agencies to advance UNESCO's S&T activities after President Bush announced that the US would rejoin.

She also led OSTP's management of US agency participation in the Global Science Forum of the Organization of Economic Cooperation and Development (OECD). This involved building and maintaining relations with the scientific community, industry and academia for a broad range of projects, such as the OECD's Task Force on Radio Astronomy and the Radio Spectrum to protect scientific research opportunities while supporting the satellite communications industry's commercial interests.

Flatten has served in OSTP during both the Clinton and Bush Administrations, and has joined the US President's Science Advisor for ministerial-level meetings throughout the world. Her international career opportunities and personal interests have entailed extensive travel to both developed and developing countries on 5 continents.

As one of her major accomplishments while serving with OSTP, Flatten designed, directed and launched a national awareness campaign, "Global Science and Technology Week (GSTW)." Here she recruited and led over 40 public and private organizations, including essentially every Federal S&T agency, to develop new educational materials, high-profile events, and national activities to excite K-12 students across the United States about the global nature of science. GSTW conveyed to young Americans that by studying math and science in their local communities, they are also part of a larger international science and technology enterprise. She also designed and directed GSTW's successor, "Excellence in Science, Technology and Mathematics Education Week (ESTME Week)." ESTME Week was recently designated by OSTP as a national priority that should be permanently institutionalized under the National Science and Technology Council. Flatten is hoping to bring this experience with outreach to bear on the APS' planned activities for the upcoming World Year of Physics in 2005, among other areas.

Prior to joining the Federal government, Flatten held private sector positions with high-tech corporations in Washington, DC, including Booz-Allen Hamilton and AT&T Solutions. In January 1998, she joined the Office of International Affairs at the National Telecommunications and Information Administration, which operates under the auspices of the US Department of Commerce. There, she collaborated with government and industry for telecom policy development in multinational settings such as the International Telecommunications Union (ITU) of the United Nations.

A year later, she was recruited to OSTP. "Having the chance to serve in the White House Office of Science and Technology Policy was a tremendous opportunity. I now look forward to applying my experiences from government, academia, and private industry to the international interests of the American Physical Society and to serving its membership as the Director of International Affairs."