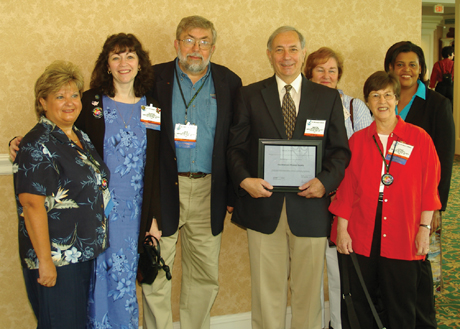 At the meeting of the Special Libraries Association in Nashville on June 8, APS Journals received the SLA Physics, Astronomy and Mathematics Division Award. The citation mentioned the APS's long-standing awareness of the importance of the "historical" literature in physics, and its commitment to archiving that literature in scanned, reference-linked and searchable backfiles made available to its subscribers at reasonable cost. Note was also taken of the Society's trailblazing role in archiving of electronic versions of its publications. Shown here receiving the Award are (l to r): Donna Magnani, Sharon Lensky, and Bob Kelly (APS Journal Information Systems), Martin Blume (APS Editor-in-Chief), Barbara Hicks (APS Associate Publisher), Louise Bogan (Journal Information Services), and Anita Wiley (APS Publisher's office).