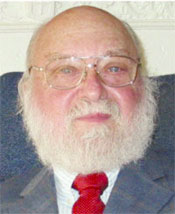 APS President-Elect Leo Kadanoff has been awarded the 2006 Lorentz Medal by the Royal Netherlands Academy of Arts and Sciences. He received the medal in Amsterdam on November 27 for his contributions to statistical physics, in particular to the theory of phase transitions.

According to a press release from the Royal Netherlands Academy, Kadanoff's research has revolutionized the way physicists regard sudden changes in matter such as the transition from liquid to gas or the onset of magnetization at the Curie point. Kadanoff discovered that such phase transitions obey certain laws applying universally. His ideas have also been exceptionally fruitful in other areas of physics. By applying his theory to such diverse phenomena as turbulent water and running sand piles, he developed a systematic approach to what are now called “complex systems.” In addition, his work has cast new light on chaotic dynamics beyond physics, such as stock market fluctuations, heartbeat irregularities, and traffic jams.

Kadanoff received his PhD in physics from Harvard, which was followed by a postdoc in Copenhagen. He taught at the University of Illinois (1962-1969) and Brown University (1969-1978), before moving to the University of Chicago where he is John D. and Catherine T. MacArthur Professor of Physics and Mathematics.

The Lorentz Medal was established in 1926 by the Royal Netherlands Academy, in honor of the 50th anniversary of the doctorate of Hendrik Antoon Lorentz. The gold medal is awarded once every four years in recognition of important contributions to theoretical physics. Out of 19 previous Lorentz medalists, 11 went on to win the Nobel Prize.