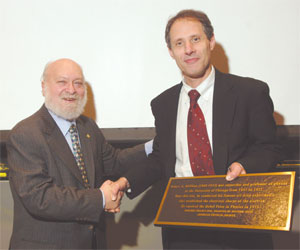 On November 30, APS President-elect (now President) Leo Kadanoff (left) presented a plaque to the University of Chicago, to honor Robert A. Millikan, as part of the APS Historic Sites initiative (see APS News, May and October 2005, January and February 2006). Millikan received the Nobel Prize in 1923 in recognition of two major achievements: measuring the charge of the electron in his famous oil-drop experiment (see “This Month in Physics History,” APS News, August/September 2006), and verifying Einstein's prediction of the relationship between light frequency and electron energy in the photoelectric effect. Kadanoff is himself a faculty member in the Chicago physics department. Accepting on behalf of the University was Thomas Rosenbaum (right), Vice-President for Research and for Argonne National Laboratory