Edwin Hubble Expands our View of the Universe 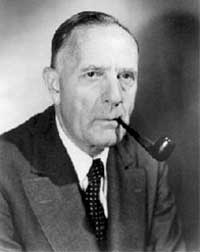 Until the mid 1920s, most scientists thought the Milky Way was the entire universe, and that the universe was static, unchanging. With two discoveries, announced in January 1925 and January 1929, astronomer Edwin Hubble radically changed our idea of the cosmos, showing first that the universe was much larger than previously thought, and second that it is expanding, getting larger and larger all the time.

Edwin Hubble was born in 1889 in Missouri. As a young man, he was tall and athletic, known especially for his talent at boxing, basketball, and track. He earned an undergraduate degree in math and astronomy at the University of Chicago, and then studied law at Oxford on a Rhodes scholarship, following his father’s wishes. Hubble returned to the US and joined the Kentucky bar, but quickly decided law wasn’t for him. He taught high school Spanish for a year before heading back to the University of Chicago to earn his PhD in astronomy in 1917. After serving in the Army in World War I, he went to southern California to work at the Mt. Wilson observatory, home of the 100-inch Hooker telescope, the largest in the world at the time.

In the early 1920s many astronomers believed that objects then known as nebulae were nearby gas clouds in our own galaxy, and that the Milky Way was the entire universe, while others thought the nebulae were actually more distant “island universes” separate from our own galaxy. Harlow Shapley and Heber Curtis had a famous debate on the issue in 1920 [see This Month in Physics History, April 2000].

At Mt. Wilson, Hubble began measuring the distances to nebulae to try to resolve the issue, using a method based on an earlier discovery by Henrietta Leavitt. She had found that a type of star known as a Cepheid variable had a predictable relationship between its luminosity and its pulsation rate. Measuring the period of the star’s fluctuations in brightness would give its absolute brightness, and comparing that with the star’s apparent brightness would yield a measure of the star’s distance.

Hubble found he was able to resolve Cepheid variables in the Andromeda nebula, showing that the nebula was in fact a separate galaxy rather than a gas cloud within the Milky Way. He also showed that the galaxy was much farther away than previously thought, greatly expanding our view of the universe. Hubble announced the finding on January 1, 1925 at a meeting of the American Astronomical Society in Washington DC.

Following the groundbreaking announcement, Hubble continued measuring the distances to far away astronomical objects, measurements that in a few years would lead to a discovery with even more radical implications for cosmology.

It was already known that nebulae appeared redder than they should be. Astronomers, notably Vesto Slipher, had found that the light from most nebulae was redshifted, indicating that most of the nebulae were receding at high speeds. But it wasn’t understood why other galaxies would all appear to be moving away from us.

Hubble continued his meticulous astronomical measurements. He collaborated with Milton Humason, who had begun working as a janitor at the Mt. Wilson observatory, then rose to become a night assistant and then an assistant astronomer. Humason observed spectra, while Hubble concentrated on finding distances to various objects.

After collecting enough data points, Hubble and Humason found a simple linear relationship between an object’s velocity and its distance from us. Hubble’s law, as it is known, indicates that galaxies are moving away from each other at speeds proportional to their distance. Hubble’s distance measurements turned out to be incorrectly calibrated, in part because he had failed to realize that there are actually two types of Cepheid variables, but Hubble’s law still holds.

Hubble submitted a paper describing the velocity-distance relation to the Proceedings of the National Academy of Sciences in January 1929, and it was published in March (the paper is available online at: http://www.pnas.org/misc/Hubble.pdf). Hubble first plotted the trend using 46 galaxies, but in the next few years continued to collect data for many more galaxies, which added further confirmation.

In his paper, Hubble didn’t discuss the implications of what he had found, perhaps preferring to leave the interpretation to theorists. He simply presented the empirical law relating galaxies’ distance to their velocity. But others quickly recognized that Hubble’s discovery indicated that the universe was expanding and that Hubble’s observations provided the first observational support for what later became the big bang theory.

Scientists had been convinced that the universe was static. Einstein had even added a fudge factor known as the cosmological constant into his equations to make them consistent with a static universe. Although physicists Alexander Friedman and Georges Lemaître had independently proposed expanding universe models based on Einstein’s equations, they had no data to support their theories, and were largely ignored until after Hubble’s discovery. When Einstein saw that Hubble’s results showed that the universe was expanding after all, Einstein famously called the cosmological constant the “greatest blunder” of his life.

Hubble became famous for his discoveries, and enjoyed partying with Hollywood celebrities. He continued to work in astronomy, but remained bothered by the fact that he was ineligible for the Nobel Prize because astronomy was not then considered a branch of physics. He later helped build the 200-inch Palomar telescope, and died in 1953, not long after it was completed.