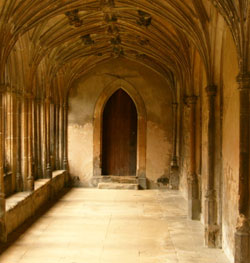 Passageway at Hogwarts?
Actually, it's a cloister at Lacock Abbey, Wiltshire, England.

A personification of major theories in physics, based on the characters of J.K. Rowling’s Harry Potter series.

0. Newtonian gravity is Ron Weasley. Solid, dependable, good long heritage. It has its limits, but is surprisingly powerful.

1. Electromagnetism is Severus Snape. You must master E&M, but so many have irrational fear or hatred of it. It leads to deep unification and glimpses of fundamental symmetries, and is strangely beautiful yet powerful.

3. Quantum Mechanics is Albus Dumbledore. No one really understands QM, though many think they do. QM has its roots in classical mechanics but goes a step beyond convention to deal with levels not imagined classically. Steeped in contradiction and contains the seed of its destruction. Quantum electrodynamics is both the end of QM and the beginning of what comes next.

4. General Relativity is Harry Potter. The culmination of classical physics, enormously powerful, providing deep insights but also intractable and limited in application. Rooted in special relativity. Apparently orthogonal to EM, yet incomplete without it, GR provides a direction for the future and a deep insight that must be reconciled. Where GR and QM meet is the paradox that must ultimately be resolved.

5. Quantum Field Theory is Draco Malfoy. The heritage is classical, and is the powerful but hideous mess you get when EM is forced to be reconciled with QM. QFT looks indomitable at times, but fails just when it is needed most, leaving the field open to new solutions and better approaches. Still there at the end, doing its thing within the limits of its applicability, in eternal opposition with GR yet always avoiding direct conflict.

6. Quantum Gravity is Neville Longbottom. It is whacky, full of missteps, but brings surprising insight when least expected and possesses hidden power. And, deep down, you always have to think that maybe really QG is the ultimate answer.

7. Cosmology is Luna Lovegood. Ignored and mocked for so long, comes into its own as the other fields have matured. Interesting, although it is a magnet for whacky ideas of all kind, but, hey you never know if maybe some of these crazy notions are really the way things are...

8. String Theory is Hermione Granger. Beautiful, powerful, the signpost for future directions. Tries to encompass all classical and quantum phenomena, and to develop master all the most powerful techniques. May contain all the other fields within it. But, curiously directionless without classical direction, needs external input to be prodded into applying itself to real world issues.

9. Voldemort is Aryan physics (“a nationalist movement in the German physics community in the 1930s against the work of Albert Einstein”–Wikipedia). Claims classical heritage, and the power and applicability of QM while rejecting GR. Never really gets QM, although EM is classically contained within it. QM could have put him right, but failed and a generation was lost. Totally wrong about Relativity, misses the key insight and never gets the ultimate power.

Steinn Sigurdsson is Professor Lupin, when he’s not being an astrophysicist at Penn State University. This article first appeared on his blog, Dynamics of Cats.