He's Havin' a Ball at Ball 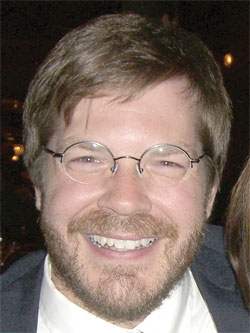 Carl Gelderloos never stops smiling. Is this Boulder-based PhD physicist in the middle of a perpetual Rocky Mountain high? Or perhaps he’s so cheery because he has the privilege of doing exactly what he loves to do everyday as a business development leader at Ball Aerospace & Technologies Corporation. His work has led directly to the design, development, and launch of spacecraft and space-based experiments, so one thing is clear: Carl Gelderloos is having a ball working for Ball.

To the outside observer, Carl’s job may seem simple: as Deputy Director of Ball’s Advanced Systems group, Civil & Operational Space Division, he is tasked with responding to NASA requests for proposals for various space missions. He is a project manager, so he diagnoses what NASA’s requirements are for a particular mission, identifies what resources Ball has and needs to solve the problem, aligns those resources with the goal, calculates the costs of the project, and crafts the proposal to articulate Ball’s unique value proposition for the mission.

Being a business development pro requires experience in complex problem-solving and project management analysis, a distinct creative eye, and an intense mathematical approach that quite possibly only a physicist could obtain, hone, and love to employ. His role “involves bridging the gap between what is scientifically interesting and what is technically possible,” Carl explains. He has to determine the project’s scientific needs and then set everything up in advance to ensure Ball can satisfy them. This may involve working with academic and industrial researchers outside of the company, or setting up research and development centers that will solve the scientific problems needed to launch and run the mission.

On the other hand, he also has to identify, analyze, and solve all the business problems associated with the mission. This involves cost analysis, supply chain identification and management, human resource allocation and training, and various other business-related issues. For each project, he directly oversees 10-15 people, but he is indirectly working with hundreds, both internal and external to Ball, and often juggles many projects and teams at once.

As an example of his work, Carl cites the recent win by Ball to build a sensor to be used on NASA’s Orion spacecraft. Orion is the spacecraft that is slated to replace the Space Shuttle as NASA’s vehicle for transporting astronauts to low Earth orbit and beyond. The sensor, a flash LIDAR (Light Detection and Ranging), will be the primary instrument used to guide the spacecraft to autonomous rendezvous and docking, to both the International Space Station and future lunar spacecraft.

“We’ve been developing the technologies internally for several years, but this was the first opportunity we had to propose it for a NASA mission,” says Carl. His team merged state-of-the-art focal plane, laser optic, and electronics capabilities into a compact system that met the low mass and power requirements of the mission.  What resulted was a 3-D imaging system that output data at video rates, and the algorithms to compute the spacecraft’s bearing and relative position.

“By combining capabilities uniquely and creatively, we’ve leapfrogged existing sensors and created a system that enables new capabilities and missions for NASA. Being able to harness our team’s creativity, developing a plan for producing and proving it out, and ultimately creating an affordable product that enables autonomous rendezvous and docking in space is incredibly rewarding and exciting,” states Carl. Now the next stage is to find other ways of using and applying the technology.

Carl’s work is on the “front end,” as he interacts directly with the customer, so while he helps launch Ball’s participation in a mission, he often does not play a detailed role later on as the project unfolds. But what he loves most about his work is his ability and opportunity to express his creativity and bring simplification to any project, a talent and a passion he realized when he was first drawn to physics.

Carl, who is now 41, originally became entranced by physics after “seeing how simply and elegantly a huge variety of natural phenomena could be interpreted using just a few simple equations and simple mathematical relationships,” he recalls. “The simplicity and the elegance of it was what really drew me in.”

He received his bachelor’s degree in physics from Hope College in Holland, MI in 1989, and his PhD in nuclear physics from University at Stony Brook in 1994. After a post-doctoral appointment at the University of Colorado at Boulder, he worked for Hughes Space & Communications, and joined Ball Aerospace in 2001.

His assignments at Ball reflect a veritable rainbow of space-related projects. He participated in the design of a mission to Jupiter to explore its moons, developed an earth science project that involved remote sensing in the atmosphere, and designed avionics innovations that control launch vehicles.

Carl playfully hints that “there are plenty of opportunities where you have to choose to either laugh or cry” in his profession, and true to his jovial nature, is more than happy to reveal an experience that epitomizes this mantra. While a post-doc, he was collaborating with a potential future employer and borrowed some of his lab equipment to do a measurement. The experiment was taking place inside a large electromagnet that was turned off.

“Somehow in the middle of the night, somebody threw a switch and the electromagnet came on,” Carl describes, chuckling. “There was enough iron in the experiment to accelerate it A LOT and it smashed into little tiny pieces. That was the end of the experiment. I gathered the pieces together into a box, and showed up the next day for the informal job interview with the guy’s experimental apparatus in shards.”

“It was certainly a tough start to the interview,” Carl jokes, and although it ended up not working out, “in retrospect it was pretty funny.”

After his post-doc he considered a career in academia, but fortuitously had an opportunity to look at industry. “My realization was that I could study a lot of the same problems in industry (as in academia) with a different approach, but oftentimes with a much larger budget” he says. “It was an epiphany for me that the supposed confines of a career in industry were much less than I supposed.”

Lately, however, he only occasionally does physics calculations. He quips that the length of time between doing integrals, which has increased over time, is inversely related to how much he categorizes himself as a physicist.

Yet, “physics has been a wonderful career choice for me. I began studying physics with no thought of what the employment picture was; it was from a perspective of pure enjoyment,” he says. “I found it intellectually fascinating and that was sufficient in and of itself. Studying physics opened lots of doors…In industry I have been able to participate in projects and do things and play with very, very large toys to an extent I never dreamed possible. From my perspective I haven’t found a downside (to studying physics) yet.”

No wonder. Considering Ball is the 15th largest employer of physicists in the US (according to the American Institute of Physics), Carl has undoubtedly been able to reap the rewards of the company’s philosophy that allows physicists to focus their skills in many different roles. Carl contributes by seeking out and hiring physicists at all levels.

In the end, Carl’s attraction to physics and to his work at Ball is about simplicity, creativity, and fun. Carl himself is a simple guy. He likes space, he likes physics, and he likes how he can use his scientific training to simplify and solve business and technical problems for his customers. With goals that can be simply achieved with a physics platform, can you blame him for smiling all the time?