Physicist Chosen to be Secretary of Energy 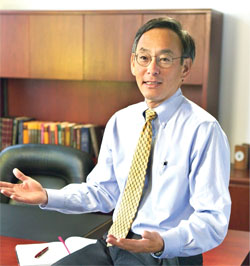 Steven Chu, Director of Lawrence Berkeley National Laboratory, has been chosen by President-elect Barack Obama to be nominated the next US Secretary of Energy.

Chu, an APS Fellow, received the APS Arthur L. Schawlow Prize in Laser Science in 1994 and the APS Herbert P. Broida Prize in 1987. He received the Nobel Prize in 1997 for his work on laser cooling and trapping of atoms.

“Steve Chu’s scientific accomplishments make him an outstanding selection for US Energy Secretary. As the Obama administration develops its energy policy, he will undoubtedly serve as an effective leader, striving to strengthen US energy security and tackle the devastating effects of global warming,” said APS Past-President Arthur Bienenstock.

Chu has been a strong supporter of renewable energy and an advocate of controls on greenhouse gas emissions to combat global warming. As director of Berkeley Lab, he increased the lab’s focus on researching clean energy technology, including advanced biofuels and solar energy technology. Chu has also been a leading organizer of the Joint BioEnergy Institute, one of three Bioenergy Research Centers funded by the U.S. Department of Energy, and the Energy Biosciences Institute, a $500 million pact among BP, the University of California, Berkeley, Berkeley Lab, and the University of Illinois.

Chu received his PhD in 1976 from the University of California, Berkeley. He worked at Bell Labs from 1978 to 1987, then became a professor in the physics department at Stanford University. He served as chair of that department from 1990-1993 and 1999-2001. He became director of Berkeley Lab in 2004.