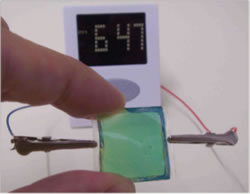 Energy was a hot topic at the 2009 APS March Meeting. Eleven sessions had titles explicitly addressing energy generation or storage, compared to zero at least year’s meeting, and two at the 2007 meeting. An additional five sessions at this year’s meeting were devoted to hydrogen storage, which is crucial if hydrogen is to be used as a motor fuel.

A number of talks focused on the use of polymers in the development of new batteries, fuel cells, and photovoltaics. In batteries, the race is on to improve on the current generation of lithium-ion batteries found in our laptops and cell phones, with the goal of creating batteries that can power the electric cars we have all heard so much about.

According to Mohit Singh, co-founder of the startup company Seeo, “we need high-performance, high-density, low-cost energy storage…but we are facing thermodynamic limits” with the current lithium-ion battery, in which “the weakest link is the electrolyte.” Singh is developing a lithium-ion battery electrolyte using a “block copolymer” approach, in which a polymer that has good mechanical properties is combined with one that has good ion conductivity.

Singh’s plastic electrolytes are more chemically stable than the liquid electrolyte solutions in current use, which are flammable, and which react with the battery’s electrodes, causing the battery’s capacity to fade over a few years. Singh’s electrolytes allow him to use lithium metal rather than a compound such as lithium cobalt oxide as an anode material, leading to higher energy densities. His main challenge right now is to improve the conductivity of the plastic electrolyte at room temperature.

Hiroyuki Nishide of Waseda University in Tokyo is developing a “totally organic battery” using polymer electrodes made of organic radical molecules. Radicals, such as the DNA-attacking free radicals in our bodies that we have heard so much about, have unpaired electrons that make them highly reactive; however, Nishide’s group has identified over 500 stable radical structures that can be formed into long, flexible, current-conducting chains.

Combined with a plastic electrolyte, the organic electrodes allow for the construction of bendable batteries that may be ideal for applications such as rollup displays, wearable devices, and integrated circuit smart cards. In addition, because they are made from entirely non-toxic, organic materials, these batteries avoid some of the waste disposal issues associated with batteries that contain metals. Nishide’s batteries have the advantage of rapid charging and discharging compared to traditional batteries, but at the cost of decreased energy density.

The hydrogen fuel cell is another promising but challenging technology that has been touted as the future of automotive travel. Klaus Schmidt-Rohr, a researcher at Iowa State University, presented research on Nafion, a fluoropolymer currently considered a “benchmark material” for proton-exchange membranes in hydrogen fuel cells due to its mechanical and thermal stability and fast diffusion of water and protons. Because it is too expensive for large-scale production, “we need to replace Nafion, but first we need to understand how it works,” according to Schmidt-Rohr, who used nuclear magnetic resonance and small-angle scattering techniques to develop a model of parallel, randomly packed water channels stabilized by the stiff Nafion fluorocarbon backbone. “Ours is the only model that accounts for all the transport properties” of Nafion, he said. A number of other speakers at the meeting also presented research on Nafion.

Another major technical challenge for commercializing the hydrogen fuel cell is storing hydrogen fuel. As Yong-Hyun Kim of the National Renewable Energy Laboratory put it, “to be useful is to be stored.” Storing molecular hydrogen as a gas requires enormous volumes or pressures, whereas liquid hydrogen requires very cold temperatures—neither of which is convenient for a motor fuel. What is needed, says Mei-Yin Chou of the Georgia Institute of Technology, is “solid-state hydrogen storage for low-volume, safe use.”

One popular class of material are complex metal hydrides such as sodium alanate (NaAlH4), which contain four atoms of hydrogen and only two light-weight metal atoms. Chou presented research on the role of a titanium catalyst in allowing the hydrogen to bind and be released from the compound with reasonably fast kinetics. According to Puru Jena of Virginia Commonwealth University, however, materials lighter than aluminum are required to achieve high enough energy densities, but these often bind hydrogen either too strongly or too weakly. Jena presented research on the use of nanotubes and fullerenes to store hydrogen in “quasi-molecular form,” rather than as individual atoms, at an ideal binding energy. He found that a C60 molecule doped with lithium and boron atoms can store up to 9% hydrogen by weight in a stable form with a reasonable binding energy.

Of course, batteries and hydrogen compounds do not generate energy; they merely store it for later use. Many speakers presented research on photovoltaics to convert energy from sunlight into electricity. One of the principal challenges facing the solar energy industry is that current high-efficiency solar panels are too expensive for large-scale production. Yueh-Lin Loo of Princeton University is working to create low-cost, sustainable organic solar cells “to help with the energy challenge.” Her research focuses on developing solution-processible conductive polymers doped with polymer acids, to replace current, more expensive vacuum deposition techniques.

Another active area of research is artificial photosynthesis, also known as “biologically-inspired solar energy harvesting” in the meeting’s scientific program. The hope is to design systems that mimic green plants’ ability to store sunlight energy as chemical fuel, but in order to make this possible, there is still a great need for a better understanding of natural photosynthesis. Tessa Calhoun of the University of California, Berkeley presented research on the use of two-dimensional Fourier transform electronic spectroscopy to study the coherences of excitons—delocalized electronic excitations—in Light Harvesting Complex II (LHCII), which is a complex of proteins and chlorophyll molecules that may play a role in allowing plants to capture and transfer light energy with near-zero photonic energy loss. Leonas Valkunas of Vilnius University in Lithuania also presented research on LHCII, specifically its role in helping plants dissipate excess sunlight energy in the form of heat.

At a special symposium on energy and the environment, George Crabtree of Argonne National Laboratory gave an overview of the major sustainable energy materials and technologies that are being developed. Although “sustainable energy technology requires complexity and design, whereas fossil fuels don’t,” Crabtree believes we may be at the “dawn of a new era in computer modeling, nanoscience, and complex materials,” which will allow us to “control complexity, not just observe it, in ultra-small and ultra-fast regimes…We can now design materials on computers and predict their behavior.” Ultimately, Crabtree said, “next-generation energy technologies will be developed. The question is, will we be buying or selling them?”