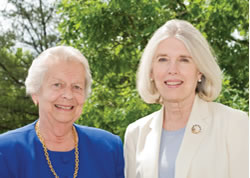 
Kate Kirby of the Harvard-Smithsonian Center for Astrophysics will be the new Executive Officer of the APS, succeeding Judy Franz, who is retiring after serving in the position for 15 years. Kirby will assume her new position at APS headquarters in College Park, MD in late July.

The Executive Officer is one of three APS Operating Officers. Together with Treasurer/Publisher Joe Serene and Editor-in-Chief Gene Sprouse, Kirby will oversee the day-to-day operations of the Society. She will be responsible for meetings and membership, as well as programs such as education, outreach, public affairs, and international affairs.

Kirby earned her bachelor’s degree in chemistry and physics from Harvard/Radcliffe College in 1967 and her PhD from the University of Chicago in 1972. After a postdoctoral fellowship at the Harvard College Observatory (1972-73), she was appointed as Research Physicist at the Smithsonian Astrophysical Observatory and Lecturer in the Harvard University Department of Astronomy (1973-1986 and 2003-present). She also is a Senior Research Fellow of the Harvard College Observatory. From 1988 to 2001, she served as an Associate Director at the Harvard-Smithsonian Center for Astrophysics, heading the Atomic and Molecular Physics Division. In 2001, she was appointed Director of the National Science Foundation-funded Harvard-Smithsonian Institute for Theoretical Atomic, Molecular and Optical Physics (ITAMP).

Among her other activities are service on the Department of Energy Basic Energy Sciences Advisory Committee (2003-2008) and being co-chair of the BESAC Subcommittee on Theory and Computation. She has been a member of the National Academy of Sciences/National Research Council Decadal Assessment Committee for Atomic, Molecular and Optical (AMO) Science (AMO2010), and Chair of the International Conference on Photonic, Electronic, and Atomic Collisions (2001-2003).

Kirby said she is elated about beginning her tenure at APS.

"Having served the Society for well over two decades as a volunteer on a number of committees, the Council and Executive Board, I am excited to be joining the APS leadership team,” she said. “I look forward to working with APS staff and the membership to advocate for physics in the public arena and to serve the community of physicists throughout the US and the world."