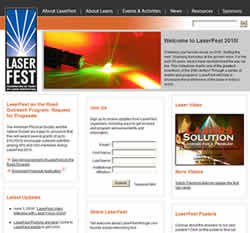 LaserFest made an early public appearance at June’s Conference on Lasers and Electro-Optics and International Quantum Electronics Conference (CLEO/IQEC) in Baltimore. APS, partnering with the Optical Society of America, unveiled the yearlong celebration of lasers at the conference to get a head start at promoting the wide array of programs planned for next year.


Timed to coincide with the 50th anniversary in 2010 of Theodore Maiman’s construction of the first working laser, LaserFest will highlight the importance of lasers through history and their potential for future innovation. Throughout the year a variety of programs and events nationwide will raise public awareness about the laser and its applications in today’s world. Planned programs include public demonstrations, traveling shows, videos, and educational materials for schools across the country.

“The goal is to introduce the public to lasers and convey the idea that basic science is very important, especially because so many things we use in our daily life are laser- based or use lasers in some way. The fiftieth anniversary is a great way to highlight that,” Nadia Ramlagan, APS’s LaserFest project Coordinator said.

The program is just getting underway. The traveling booth at CLEO/IQEC was the first official LaserFest event aimed at disseminating information about next year’s activities. The booth featured stickers, posters, light-up pins and other giveaways emblazoned with LaserFest logos and information about the LaserFest website. As 2010 approaches, the booth’s focus will expand further as events and programs start to take off. It will travel to scientific and teaching conferences featuring information and demonstrations on how to convey to the public the importance of lasers.

Ramlagan said that the reaction by the optics scientists at CLEO/IQEC was overwhelmingly positive. The LaserFest booth at the conference’s PhotonXpo was one of the trade show’s most popular exhibits. People could be seen wearing the light-up LaserFest giveaways throughout the convention hall. By the end of the conference, nearly three hundred people had signed up for the LaserFest e-newsletter.

“I think it’s a great idea,” said Xaio Qin Li from the University of Texas in Austin, “Lasers are one of the greatest technical inventions ever.”

LaserFest is designed to appeal to broad segments of the population, including educators, legislators, and anyone else interested in science. One segment the organizers are especially trying to reach out to are youngsters. This fall APS will release its annual PhysicsQuest kit themed to coincide with LaserFest. Aimed at middle school students, next year’s kits will feature classroom laser experiments and a comic book starring Spectra, LaserFest’s super-heroine. In it she will explain the history and physics of the laser while combating her arch nemesis, the evil Miss Alignment.

“I never would have thought of a comic book, but I like it,” Daniel Mittleman of Rice University said, “I think it’s a very cool idea. I have a seven-year-old at home. I’m very in favor of her becoming a physicist when she grows up.”

Funding from the National Science Foundation and the Department of Energy will also help LaserFest promote the importance of laser science. The agencies have awarded $300,000 in grants for events such as LaserDays and LaserFest on the Road, to bring the excitement of lasers to people nationwide.

“Anything to interest young people in lasers is a good thing,” said Andy Bayamian of the National Ignition Facility, “We don’t have enough young people going into laser technology,”