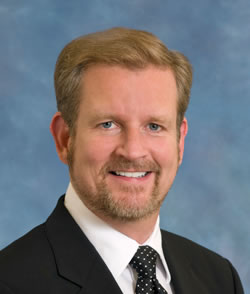 Raytheon Missile Systems (RMS) is the world’s leading producer of weapon systems for the United States military and the allied forces of more than 50 countries, according to company communications. It employs 12,500 people and had sales of $5 billion in 2007. It is led by Dr. Taylor Lawrence, a physicist who likes big problems, has shared a classroom and a stage with Richard Feynman, and once inspired a roomful of US senators to don pocket protectors and “geeky looking glasses” in recognition of Lawrence’s vocation.

His intersections with Feynman occurred while he was studying physics as an undergraduate at the California Institute of Technology. As a junior, Lawrence took a course on the quantum limits of computing with Feynman. “What was so amazing about him–and this kind of gets your juices going about physics,” says Lawrence, was that “he had such an amazing understanding of the physical world and he was the first one who convinced me it wasn’t about the math, it was about the physics.”

Lawrence was taking relativistic quantum mechanics and had difficulty understanding the concept of renormalization. He fortuitously ran into Feynman in the hallway and requested his help, even though he wasn’t taking a course from him at the time. “Here I am ‘Joe Undergraduate’ and I asked if I could come by…and he said sure…” recalls Lawrence. “He was so open.”

Feynman explained to Lawrence that “it’s not about the math, it’s about the result,” he says. “He said the math is just a tool that allows you to compute something and if it’s telling you the wrong thing, then it’s the math that’s wrong, not the physics… It sort of flipped my universe over.”

Lawrence’s interaction with Feynman extended beyond the realm of physics. They both auditioned and won parts in the play “The Madwoman of Chaillot”, presented by the Theatre Arts Department of Caltech. Feynman played the Sewer Man and Lawrence was a street urchin. “There was a kind of buzz when he came to try out,” says Lawrence. They shared only one scene together “but just to be in a play with Richard Feynman was very cool…He was a good actor. He had fun with it. He’d ham it up.”

While he was in college, Lawrence “didn’t know exactly where my path was going to go,” he recalls. “I knew I wanted to get a PhD–that was one of my life’s goals. But I didn’t know if I wanted to do that right out of college.” He did know for certain that he “wanted to go out and make some money,” he says.

So upon graduation, he moved to San Diego where he took a job as a senior staff scientist in the Research and Development division of Trex Enterprises, a high technology company that served the defense industry. His work there exposed him to the role physics plays in the industry, and set him on his current career path, he says.

While in San Diego, Lawrence learned of a program at LLNL that would fund his PhD while he worked there. He applied for and was accepted into the program, and enrolled at Stanford University for his doctorate. His thesis advisor was Robert Laughlin, “probably the most brilliant man I had ever worked with closely,” says Lawrence. His research focused on high temperature superconductivity.

Although Lawrence runs a global enterprise today, he considers one of his most profound professional experiences to have occurred while he was working on his PhD. “There was a moment where I discovered a new way to measure something that led to improving my ability to [take measurements] by several orders of magnitude,” he says. He was measuring optical properties during the superconducting phase transition. Inside the vacuum chamber where he was performing the experiment, “there was a noise source coming from the impurities of the material itself and I found a way of basically using heterodyne techniques [to] divide out that noise source and measure [the optical properties more precisely by] a couple more orders of magnitude.”

“I will never forget that feeling that I discovered a new way to do something,” says Lawrence. “You rarely get it now at my level in management because you’re not so close to the problems…” It became one of the cornerstones of his thesis and although “it’s not like discovering a cure for cancer,” he says, he explains that “the pride that this is (my) product and it has a meaning and a result,…was pretty profound.” He jokes that his discovery is probably “an ancient technology” today, “but at the time it was pretty cool.”

By the time he finished his PhD and left LLNL in 1992, “I had figured out that I was on the path of doing really big research,” he says. “I saw myself on larger and larger projects and eventually going into management and didn’t see myself as going the path of a tenured professor.”

He was attracted to the defense industry because of its intersection between national service and high technology, he says. “I was drawn to applying technology to national security applications…[and] to protecting our country and protecting the men and women who serve our country.”

Lawrence says this attitude is a fundamental calling. “That [is] a very important part of who I am as a physicist,” he says. He concedes that “sometimes my colleagues in physics don’t necessarily see the same calling.” However, Lawrence feels a certain responsibility to apply knowledge and discovery in “physics to what I consider to be very important problems…[in support of] key missions for our country,” he says. “It’s part of national service.”

Lawrence has held many positions in the defense industry. He has served as the deputy program leader of the Advanced Imaging, Imaging & Detection Program of the Lasers Directorate of LLNL, as deputy director of the Information Systems Office of DARPA, and in various management positions at Northrop Grumman, including as the sector vice president and general manager of the Systems Development & Technology division. He joined Raytheon in 2006 as vice president of Engineering, Technology and Mission Assurance, and was promoted to his current position in July 2008.

While Lawrence was at DARPA, he was invited by Senator Richard Shelby (of his home state of Alabama) to serve as staff director for the Select Committee on Intelligence for the U.S. Senate. During his two and a half year tenure, Lawrence was charged with explaining the complicated physics of the intelligence projects on which the committee voted. “I think some of the best times I had there was when we had closed sessions, and the senators could ask questions about the way things work,” recalls Lawrence. “I loved just explaining, kind of like how Feynman would explain, [for example,] here’s how a satellite in space takes pictures with this kind of resolution, [or] here’s how a satellite in space listens in on communications.”

His senate colleagues appreciated his technical expertise and his understanding of large defense projects. They referred to him as “our physicist”. When Lawrence decided to leave the committee and go to work for Northrop Grumman in 1999, they threw him a surprise farewell party. “When I walked in [to the party], they said they were really sorry to see ‘their physicist’ leave the committee;…then I noticed they all had pocket protectors on and geeky looking glasses,” describes Lawrence with a laugh. “It was very funny to see all these senators expressing appreciation for…their physicist. Even Senator Bob Kerrey said it was always amazing for [me] to try to explain physics to the senators.”

Today, Lawrence is excited about innovation in defense technology. “The defense industry is always changing,” says Lawrence, “because the nature of the products we produce must change to meet the changing requirements of our customers.” Security needs of RMS customers range from counter-insurgency in remote areas like Afghanistan, to protection of shipping or vital assets like oil fields, to looking for capabilities to secure urban environment entities, he says. And in the next ten years, he says, we can expect to see innovation in greater sensitivity in detectors, higher throughput in electronics, better processing of information, better communications, and more and smarter networked weapons systems.

His physics background has helped him to lead the business to success and growth, he says. “…Physics is an incredible foundation [to have for this business] because it draws on all the tools of mathematics, [and] it teaches you analytical and critical thinking.” Furthermore, physics guides you to “think about your own concept of the world and then challenge it, measure it and see if it connects,” says Lawrence. “That’s another thing I learned from [Feynman]: sometimes your physical intuition may not be exactly right…It teaches you to think beyond ‘the normal’ …and ask what does the physics tell you?”