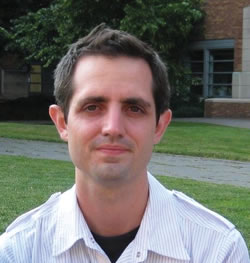 There are some places a particle theorist doesn’t usually find himself. Perched on a small platform a hundred feet above the forest floor in central Oregon is one of them. But that’s where I was, watching the tree tops sway far below an open steel tower while a strong wind threatened to blow me off. In one hand I clutched a safety line with the hope that I wouldn’t need to test its strength.

I was researching a story about the amount of carbon that can be sequestered in the Northwest’s forests. It was unusual for a physicist, but just another day in the life of a science journalist.

With support from the APS, that’s what I became for the summer. I’ve long been interested in the interface between science and the public, so when I heard about the Mass Media Fellowship Program it sounded like an ideal way to spend the time between graduating from a PhD program and the start of a postdoc.

Physics graduate school offered many new experiences, but few chances to engage people from outside the field. The Fellowship, administered by the American Association for the Advancement of Science, provided exactly that. I received basic training in how to research and write news articles, and went to work as a reporter for The Oregonian, a daily newspaper based in Portland.

It was quite a change from what I was accustomed to. I moved from the isolation of a windowless grad student office to a bustling news floor. I could call anyone out of the blue, from lab assistant to heads of institutes, and they were happy to give me hours of their time.

The journalism business moves fast. By the afternoon of my first day I was already in the middle of a story, on the phone with a psychologist in Germany. I wrote two articles that week, which was a pace that lasted through the summer.

With the help of my excellent editors, in my ten weeks at The Oregonian, I learned how to take disparate facts about a particular piece of scientific research and weave them into a strong narrative that kept the readers reading. That is, I discovered how to tell the story of discovery, and place ideas in their “big picture” context.

One of the most exciting aspects of this summer was the range of topics I had a chance to cover. Among others, I dived in to hydrogen fuel (stored using chicken feathers, of course), the connection between forests and climate change, and how we learn about human cancer risks using tens of thousands of trout. I also had ample opportunity to write about my own beloved physics and astronomy, and even managed to sneak some dark matter on to the front page.

My editors were very receptive to the stories, which helped them get good placement throughout the paper. I wrote a number of stories for the front page, a centerpiece for the Sustainability section, and even a business cover story.

Whenever a piece went in to print, I got great feedback from the readers. Many sent email or called to say they were glad to see science receive prominent coverage, and others wanted more details of the research I had written about. There was a particularly gratifying moment about halfway through summer when the Editorial department ran a Sunday Letters To The Editor section on the topic of science coverage in The Oregonian. It had half a dozen letters encouraging expanded coverage and a reinstatement of the paper’s weekly science section, which had been cut a year earlier.

The recent cut in their original science reporting is symptomatic of the financial difficulties that trouble the industry. The Oregonian has weathered the storm better than many papers, but has had its share of buyouts that have contributed to a shrinking newsroom. They no longer employ a reporter whose beat is science. This made them all the more happy to have a Mass Media Fellow on board, as it’s the only way they can fill that gap in their coverage given the current economic situation.

Over the summer I gained invaluable experience in the art of science communication, and was excited to try to improve the public’s understanding of what scientists actually do. I also learned that people will get very excited about science if you give them a chance.

Though I am now about to start a postdoc in particle astrophysics, I hope to continue to develop my skills and incorporate the telling of stories into what I do in the future.