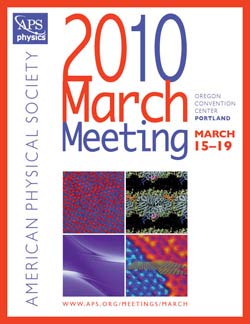 The APS March Meeting, the largest physics meeting of the year, will take place at the Oregon Convention Center and the Hilton Portland and Executive Tower Hotel in Portland, Oregon from March 15–19. Meeting attendees will present over 7,000 research papers in a wide variety of fields including condensed matter, computational physics, chemical and biological physics, new materials, polymers and fluids. A number of sessions will also look to explore the role of physics in different segments of society including its role in industry, national security, human dynamics, sustainable energy, and energy storage.

This year’s meeting coincides with the fiftieth anniversary of the construction of the first working laser. To mark this important milestone, APS has partnered with the Optical Society of America, SPIE, and IEEE Photonics to put on LaserFest, a yearlong celebration of laser innovations and applications. LaserFest events at the March Meeting will focus on the importance of lasers in society, including session B5 “Five Legacies from the Laser,” and J8 “LaserFest: Laser Education and Outreach,” as well as the LaserFest booth.


Nobel Prize Lecture
One of the 2009 Physics Nobel Laureates, George E. Smith, will reprise his Nobel Prize Lecture on Wednesday, March 17, at 5:45 p.m. The title of his talk is “The Invention and Early History of the CCD.”

The World’s Fastest Transistors. The quest for faster computer speeds has pushed transistor technology ever smaller, regularly doubling average processing speeds about every eighteen months. Today millions of micro-sized transistors are able to fit on a single computer chip the size of a fingernail. Silicon has for decades formed the basis for this computing revolution, but experts predict that the technology is rapidly approaching its limits. Researchers looking to the future expect that transistors made of graphene, single atom thin carbon sheets, will be the material that forms the basis of future transistors. Thus far researchers have run into difficulty getting graphene to create an effective band gap that prevents current from flowing when a circuit is turned off. However, physicists at IBM research labs think that stacking layers of graphene on top of each other could be an important step towards solving this problem. (X21.4)

Magnetic Tuberculosis Detector. Tuberculosis is a potentially deadly disease that infects up to two billion people around the world, often without them knowing it. Most of the time, TB remains dormant, but in about ten percent of cases, the infection can spread from a person’s lungs to other parts of their body and develop into full-fledged tuberculosis disease. Today’s septum smear infection test was first developed nearly a century ago, and only works when large numbers of the bacteria are present. A team of physicists at Massachusetts General Hospital and Harvard Medical School led by Ralph Weissleder and Hakho Lee has developed a new easy-to use hand-held device that can detect the presence of the bacteria at concentration levels 1,000 times less than previously. Fluid from a patient’s lungs is combined with magnetic nanoparticles that adhere to the rod-shaped TB bacteria, which a miniaturized nuclear magnetic resonance system can detect. With further development, the device itself may cost as little as a few hundred dollars to produce while each test costs about ten dollars. The team hopes to field-test a prototype in South Africa later this year. (X30.8)

Solar Cells. Millions of trillions of joules of energy hit Earth every hour, and researchers have hope that capturing just a small fraction of that energy could help to power the world through the 21st century. Yang Yang of the University of California, Los Angeles has been working on ways to create cheap and easy-to-produce solar cells that could line the outside of city buildings. Using carbon-based photovoltaics combined with semiconducting polymers, Yang and his team were able to produce low-cost semitransparent solar cells that let as much light through as tinted windows, while at the same time generating electricity. Right now the solar cells have only achieved about a 7.7% efficiency rate, compared to most commercial cells that approach 20%, but research is continuing and Yang hopes that future designs that incorporate stacked “tandem” cells may reach up to 15% efficiency rates. Already a California-based company has licensed this research in hopes of developing a viable commercial product in the next few years. (L29.1)

New Technique for Measuring the Strength of Cells. Bacteria can be tough little critters. Many of these microorganisms spend much of their energy developing strong internal cytoskeletons and external cell walls. This lets them survive in even the toughest conditions. For doctors and researchers interested in creating effective antibiotics that can combat infections, finding ways to crack open the shells of these microbes is imperative. An important first step is determining exactly how tough they are. K.C. Huang of Stanford University has come up with an easy way to measure how strong a type of bacteria is. Growing cultures of them in gels of different stiffness allows researchers to see exactly how rigid a bacterium can be. Using this method, which they call the Cell Length Assay of Mechanical Properties, or “CLAMP,” medical researchers will be able to easily see the effectiveness of a chemical or treatment designed to weaken a bacterium. (Q7.1)

AC/DC Power Converter as Wide as a Human Hair. Most electronic devices run on a direct current while wall sockets deliver an alternating current. To convert between the two usually requires bulky equipment akin to the blocky converters on laptop power cords. However, the United States military is interested in getting rid of any unnecessary bulk, and has been funding research towards finding ways to make smaller and lighter power converters. Mark Griep, Govind Mallick, and Shashi Karna of the U.S. Army Research Lab have developed a diode rectifier made of single walled carbon nanotubes the width of a human hair to convert AC to DC for low power devices. It runs at an efficiency level of about 20 percent, in the same range as larger MOSFET diodes. (X14.10)

Blood Clot Glue. When a tear opens up in a blood vessel, a gigantic protein molecule known as von Willebrand Factor unrolls itself and helps to clot the leak. The protein only exposes its sticky segments when the cut opens, and researchers Charles Sing and Alfredo Alexander-Katz at MIT have discovered why. The tear causes the blood vessel to constrict, pulling fluid in opposite directions along the vessel and stretching apart the ends of the protein. This research could shed new light on blood clotting disorders or possibly even identify new materials that could plug leaky pipes. (T11.10)

Nanotube Toxicity. Carbon nanotubes hold tremendous possibilities for medical treatments on a cellular level. Their small size means that they can penetrate through most cell membranes, delivering doses of medication directly. However recent concerns have been raised over potential dangers of the nanoparticles at high concentrations. Michelle Chen of Simmons College investigated some of the potential harmful effects of nanotubes. She treated ovarian cells of hamsters with different levels of nanotubes and watched for any ill effects. She found that in high concentrations nanotubes could be harmful, but at the lower levels being explored for medical treatments, the carbon molecules did not affect the cell’s ability to survive. (X30.7)

Infrared Pictures with a Digital Camera. It may be possible to see behind the Mona Lisa’s enigmatic smile using nothing more advanced than a digital camera. Physicist Charles Falco of Arizona State University will show how adding certain filters and adjusting focus and aperture settings on certain digital cameras can record infrared light waves. Many paints are at least partially transparent to infrared, and it would be possible to see through them using Falco’s modifications. Many art researchers have used infrared and x-rays to probe deep into famous paintings to discover corrections, original sketches, and even lost works buried underneath layers of paint.  (Q3.3)